Recently I have been spending nearly every waking hour working on my Bird Dog software for work.* I’m dealing with information on billions of network connections. I extract the stuff of interest and present it in an way which makes it easier to find the wood slivers in the hay stack. After using all the algorithmic tricks available I started finding places to do more parallel processing.

It was with great satisfaction that I found that I pretty much continuously keep all eight logical processers at 100 percent when doing certain tasks: 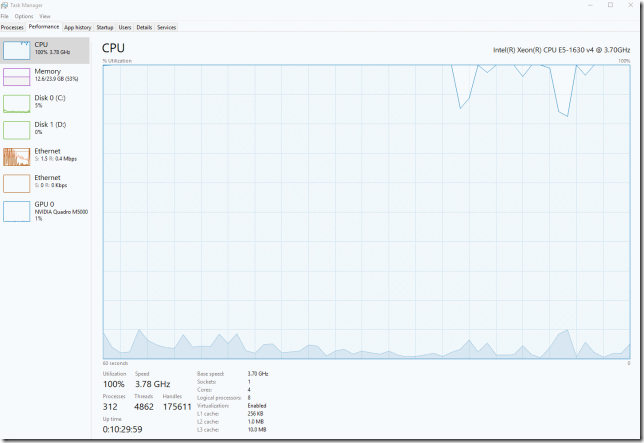 Each one of those processors is over 1000 times more powerful than the single processer I had on my first personal computer. And just the Bird Dog executable would take up over 75% of the hard disk space on that computer. Never mind the O/S or the database software which wouldn’t fit on a dozen hard disks I was so proud of at the time I first purchased it. “I’ll never run out of room on this disk!”, I foolishly told myself.

I now routinely open up text files in Vim for review and/or editing that are 50 to 100 times larger than what that hard disk could contain.

* I received an email from the company patent team earlier this week. They told me they are pursuing a patent on Bird Dog. I think the existing invention disclosure is okay, but the next one will be AWESOME! I’m really excited about what is coming up next. It’s as if a decade or more of my life’s work is coming to a focus on this one thing. I’ll probably need a more powerful computer, or set of computers, though.

4 thoughts on “Pushing the limits”