Michael Mann, the guy who claimed a graph of global temperature rise in the late 1990s resembled a hockey stick, sued a skeptic, Dr. Tim Ball, who publicly said Mann “belongs in the state pen, not Penn. State”. The libel lawsuit has now been dismissed because Mann refused to show the court the data and math by which he produced the graph. The lawsuit took six years, cost millions of (Canadian) dollars, and Mann has been told to pay the legal fees.

It is becoming more and more clear that a criminal conspiracy case against Mann and others regarding the climate change hoax is valid.

Read various quotes and get the links to the entire story below.

The defendant in the libel trial, the 79-year-old Canadian climatologist, Dr Tim Ball (above, right) is expected to instruct his British Columbia attorneys to trigger mandatory punitive court sanctions, including a ruling that Mann did act with criminal intent when using public funds to commit climate data fraud. Mann’s imminent defeat is set to send shock waves worldwide within the climate science community as the outcome will be both a legal and scientific vindication of U.S. President Donald Trump’s claims that climate scare stories are a “hoax.”

As can be seen from the graphs below; Mann’s cherry-picked version of science makes the Medieval Warm Period (MWP) disappear and shows a pronounced upward ‘tick’ in the late 20th century (the blade of his ‘hockey stick’). But below that, Ball’s graph, using more reliable and widely available public data, shows a much warmer MWP, with temperatures hotter than today, and showing current temperatures well within natural variation. 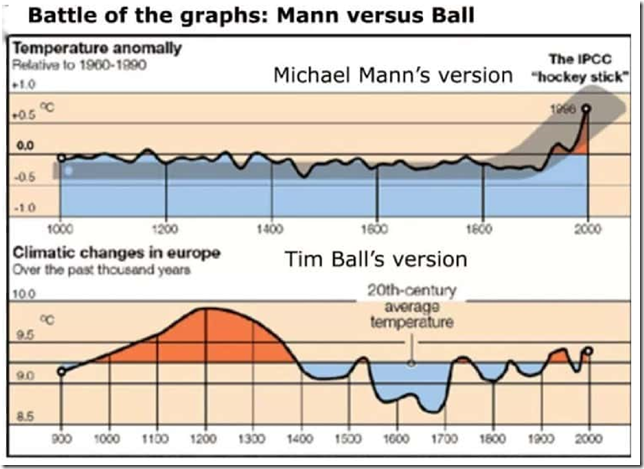 The Canadian court issued it’s final ruling in favor of the Dismissal motion that was filed in May 2019 by Dr Tim Ball’s libel lawyers.

The plaintiff Mann’s “hockey stick” graph, first published in 1998, was featured prominently in the U.N. 2001 climate report. The graph showed an “unprecedented” spike in global average temperature in the 20th Century after about 500 years of stability.

Not only did the B.C. Supreme Court grant Ball’s application for dismissal of the 8-year, multi-million dollar lawsuit, it also took the additional step of awarding full legal costs to Ball.

This extraordinary outcome will likely trigger severe legal repercussions for Dr Mann in the U.S. and may prove fatal to alarmist climate science claims that modern temperatures are “unprecedented.”

Dr Ball’s legal team adroitly pursued the ‘truth defense’ such that the case boiled down to whether Ball’s words (“belongs in the state pen, not Penn State”) after examining the key evidence (Mann’s R2 regression numbers) fairly and accurately portrayed Mann.

The aim was to compel the plaintiff (Dr. Mann) to show his math ‘working out’ to check if he knowingly and criminally misrepresented his claims by resorting to statistical fakery (see: ‘Mike’s trick‘ below).

In the pre-trial Discovery Process the parties are required to surrender the cited key evidence in reasonable fashion, that they believe proves or disproves the Claim.

Despite Ball’s best efforts over 8 years, Mann would not agree to surrender to an open court his math ‘working out’ –  those arcane R2 regression numbers for his graph.

Readers interested in gaining a deeper understanding of what is likely to eventually be exposed as a criminal conspiracy between Mann and other ‘elite’ researchers should see “The Hockey Stick Illusion” by Andrew Montford.

14 thoughts on “The end of the climate change hoax?”