Barb’s son Max, his friend Mikel, and I went to an Airsoft range last Sunday. It was the first time for Mikel and I. I was a little uncomfortable aiming and shooting what looked very much like a real gun at real people. That uncomfortable feeling went away when people started shooting at me. It’s strange how that works. I returned fire and got my share of “kills” and was on the winning side about 70% of the time. It’s not something I would do again on my own, but if someone wanted me to go with them I probably would agree just to be social.

On the way home Mikel asked how the rental Airsoft guns compared to real guns in terms of weight. Max and I told him a little lighter on average and the magazines were much lighter. I followed up with an offer to take him to the range and shoot some real guns if he wanted. He agreed and I was able to get a complete bay to ourselves for Tuesday evening.

I started him out on a .22 pistol with a suppressor. I taught him grip, stance, sight alignment, trigger prep, trigger squeeze, and follow through. Then I had him do dry fire to practice what I had just taught him. Then it was live fire with subsonic ammo. He did well. This is Mikel (with fogged up safety glasses) and his first target after 20 rounds at about five yards: 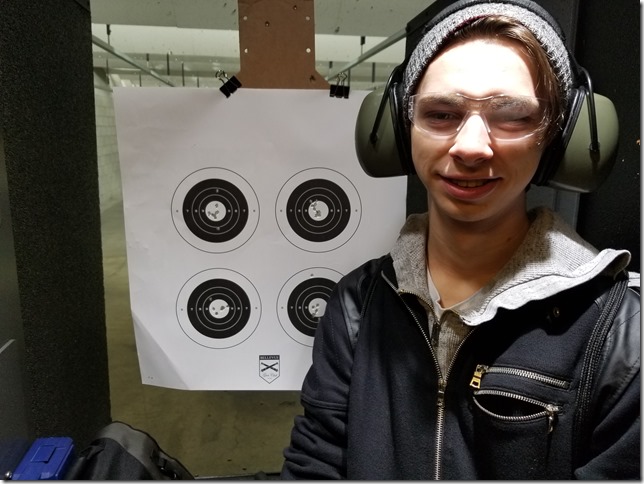 Next, no suppressor with high velocity ammo. He continued to do well and we moved the target out to about seven yards. His groups opened up some but they were still inside the rings.

I then at five yards had him shoot five rounds as fast as he could shoot while keeping them inside the rings as he rotating around the four targets while on the shot timer. He continued to keep his cool and keep them within the rings even as he shot faster and faster.

Next I got out a .22 revolver and told him this was the lightest gun I owned. And I put my STI Eagle on the bench and told him that was my heaviest handgun. He compared the two and expressed some surprise.

Next he did some dry fire with the STI Eagle. To my surprise there was a jerk of the gun when he pulled the trigger on an empty gun. I mentioned this and he said he was anticipating what he expected would happen when it was loaded. Max had told him it would have a lot more recoil. Okay then! We’re going to have fun with this!

I had him dry fire until long past the time the flinch was completely gone. Then I put in a loaded magazine (with very low powered .40 S&W loads) and pretended to put a round in the chamber. “Now, shoot just like with the dry fire”, I told him. There was a click and a big flinch. Gotcha!

I again pretended to put a round in the chamber and reminded him, “Trigger prep, sight alignment, squeeze, follow through. Just like with the empty gun.” No flinch. Again an empty chamber. No flinch. Then a loaded chamber. The bullet went into the bottom of the bullseye at five yards. Again and again he shot. 18 rounds and all near the bottom of the bull into about a 1.5 inch group. Nice. Another 18 rounds in the next target. And again, good shooting. I asked him to remember what his target looked like and I took him to another bay where people were shooting and showed him the targets people were shooting as well as the targets in the garbage cans. Most of them had such a wide pattern there wasn’t even a hint of a group near the rings.

Then I gave him Major Power Factor loads with two of the light loads on the top of the magazine so he could compare the easily. I could hear a significant difference as well as see the increased recoil from the heavier loads. He still kept the rounds on target with only an occasional stray out of the black.

“Okay, now what do you want to do?” I asked. “You can do more handgun shooting of whatever gun you want or you can shoot the AR-15s”, I told him. He was unsure. I then offered to set up multiple targets where he could move and shoot with the handgun. He lit up at this and so we put out five USPSA targets at various distances. I started him about five yards from the closest target, the second to the right at about 10 yards, and the remaining three to the right of that at about 15 yards from his starting position. I told him to start at the low ready, go slow, be safe, put two rounds on each target, move and shoot however he thought would be best to get almost all A-zone hits. He did great on the safety issue and I told him to go a little faster if he wanted. I think he shot the stage four times getting his time down into the 17 second range with reasonable hits most of the time.

Max then shot the stage a few times. Good hits with times in the 15 second range.

They asked if I wanted to shoot it so I shot it two different ways. The first was without moving. Just shooting all the targets from the start position. Something over seven seconds with five A-zone hits and five C-zone hits. The second attempt was while moving and shooting with me ending up about three feet from the last few targets. My time was in the fives with seven A-zone hits and three C-zone hits. They seemed to be impressed.

We cleaned up the range, packed up, washed up, and went outside to talk for a while. I told Mikel the five shots on five targets was practice for steel challenge events and that if he wanted he could shoot that type of match now with his skill set and not be embarrassed. I explained that it is difficult to do extremely well, but it’s easy to “Not suck”. I then told him about a couple flavors of action shooting. I described the problem solving and difficult shooting positions. And to just let me know if he wanted to go shooting again or shoot in a match.

He seemed very enthusiastic and thanked me. In my mind, I was thanking him for giving me an opportunity to bring another person onto our team.