I was at the range the other day with a .22 LR pistol. Things were going well for a while then, fairly rapidly, deteriorated. I checked the sights and the screws that hold the barrel in place and every other mechanical thing I could think of. Everything looked good.

I put up a fresh target at 10 yards and using two different types of ammo put some carefully aimed rounds downrange. The two targets on the right in the picture below are the result. 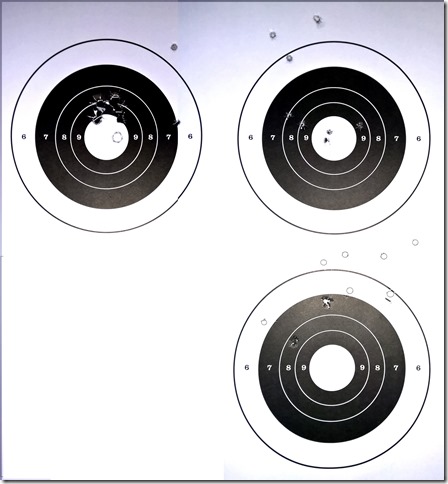 The result was very discouraging. I then put some rounds downrange with my .40 at the target on the top left above. Okay, so it’s not just me.

I checked the target carefully and could see some of the bullets were impacting the target sideways. But this is the same ammo that I have shot thousands of rounds with excellent accuracy and even greater range!

I took the gun home and cleaned it. I frequently just clean the slide and other moving parts and don’t clean the bore of the barrel. How many rounds had it been since I clean the bore? I just don’t know. Probably at least a couple thousand.

I went back to the range and tried the same two types of ammo.

This is the first set:

That’s better. But still not what it should be.

So I tried the second type:

And back to the first set:

That’s what I expected.

The bore needed to be cleaned, then it needed a little bit of fouling.

8 thoughts on “Clean your bore”