On Sunday Barb and went to the range and used the “Training Bay”. Barb practiced drawing from the holster. I set up my chronograph and tested 17 different .40 S&W loads with four different powders and two different bullet types (both 180 grain). I ended up firing 170 rounds of .40 S&W and 20 rounds of .22 into the same target. All the .40 S&W was from about 28 yards. It made for, what I thought was, an interesting target: 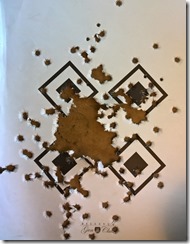 I wasn’t doing my best with each shot but I was reasonably careful. My primary goal was to not shoot the chronograph screens and having a constant point of aim helped.

But after pulling the target I wondered, “What would be the equivalent five shot group size made from the same sample of ammo?”

“Group size” has always bugged me. A better measure would be standard deviation. But that’s not what the shooting world uses. I understand why. Standard deviation is much more difficult to compute in our situation. Group size is extremely easy and as long as you are honest with yourself (don’t find excuses to throw away a bad group and always use the same number of shots when comparing) it can give you a fairly decent indication of the accuracy of your system (gun, ammo, and shooter).

One of the problems with group size is that you can’t easily compare a three shot group to a five shot, seven, or ten shot group. I spent a lot of time manipulating equations and running simulations and built a solution into Modern Ballistics. If you edit a cartridge and have it calculate the “5-shot Group Size” via “Calculate via group” you can input a set of one or more groups at various ranges and various shots per group and it will compute the equivalent 5-shot group size in minutes of angle.

Sooo… I put in the group size 13” from the target above for a 170 shot group and it immediately complained. I had programmed in error checking which said, basically, that if you are shooting a group with more than 100 shots you don’t know what you are doing. Heavy sigh.

So I went with a 100 shot group with 13 inches and came up with a 20.84 MOA five shot group. Okay. Not too bad considering the variations in the ammo (the mean velocity on any given loading varied from 907 fps to 1033 fps), iron sights, with a pistol, and not originally intending to shoot for a good group. And it would have been better had my program allowed for 170 shot groups. Converting back to inches and rounding down a bit to compensate for the 170 versus 100 shot group it comes out to 5.75 inches.

I’m okay with that.