Remember the student shooter who was having trouble handling the .40 S&W her husband bought her for self defense at home? Remember the light loads I was working on so she could handle the recoil better?

Yesterday she and her husband went to the range with Barb and I. She shot a Ruger SR22* with a suppressor and did great. She shot it without the suppressor and did great. She really liked the Ruger Mark II. And she shot my gun I have had all the problems (also here) with. With about 100 rounds through it yesterday there was only one failure to feed.

Her husband tried the .40 S&W with the two different light loads. The 148 PF (in my gun, probably less in theirs) worked fine. The first round of the 131 PF loads failed to cycle but worked okay after that.

She wanted to shoot the .40 S&W. I had her shoot my gun with the lightest loads. She did fine. No nausea. And her hits stayed on target although they weren’t quit as accurate as when she shot .22s. She tried her gun with the 131 PF loads. She had nothing but failures to extract even when I had her hold the gun more rigid. Moving up to the 148 PF loads fixed the problem although the ejected shell casing just barely popped out of the ejection port. She handled it fine. And I had her shooting at silhouette targets and around corners all without difficulty before our range time was up: 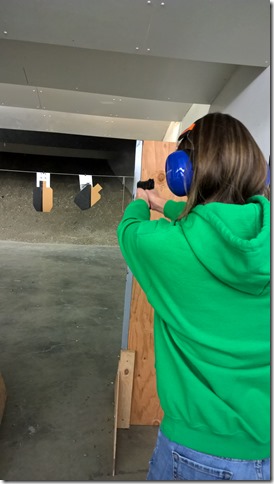 I sent them home with 100 rounds of the 148 PF practice ammo. And now I’m going to load up some of the self-defense Gold Dot Short Barrel bullets in a similar load for them.

Barb handled the 131 PF loads in my gun just fine too. I might load up a few for her self-defense needs as well.

* The SR22 wouldn’t cycle when using CCI Quiet-22 ammo. But it worked great with Standard Velocity. But wow, was it ever quiet. 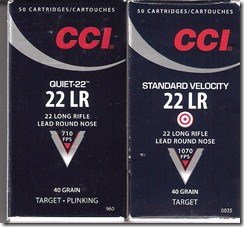