Yesterday, as you might imagine, there was quite a bit of talk at work about the shooting in San Bernardino. Two different people who I barely know and seldom see wanted to talk guns with me. Usually I might get one or two conversations a month.

One was a middle-aged woman who lives alone. She wanted to take a shooting class to prepare for home defense. She had done a fair amount of shooting growing up but had never taken any classes. Her boyfriend has quite a bit of rifle shooting but no handgun shooting. They both wanted to take a handgun class or two. I referred her to West Coast Armory and Insights Training. And suggested the specific classes I thought would be appropriate for their skill levels.

The second person was a young guy. He owns at least three guns and has a concealed carry permit. He had just got a new gun and it was shooting to a much different point of aim than his carry gun. He couldn’t figure out why it was so different. I figured I knew what the problem was but didn’t want to tell him until I knew for certain. I offered to take him to the range and look at his guns with him and figure out the problem. He brought the guns to work (left in his car, yes, our parking lot is an okay place for guns) and at lunch time we went to the range to do some tests.

I had him take a few shots with his gun to demonstrate the problem. I put the target at 15 feet and asked him to shoot at the top right diamond (I very deliberately suggested the TOP). Most of the .45 caliber holes below are the result:

Okay. I know what the problem is, but need him to figure it out on his own. I asked him to shoot a few rounds with his carry gun. The 9mm holes above are the result.

I then shot three rounds with his .45 at the top left diamond on the target. Here is the result: 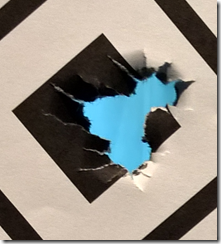 Oh. He got a big clue and I pushed a little bit more by suggesting, “I don’t think there is anything wrong with the gun or ammo.”

He agreed and had him shoot my .22. The .22 holes mixed with .45 holes in the target above where the result. The first one was the one low and to the left. The rest were in on very close to the diamond. Much better. But I knew he could do better still.

I then had him doing some dry fire exercises. I explained what it meant and repeated the mantra as he pulled the trigger on an empty chamber again and again, “Trigger prep, sight alignment, squeeze, follow through.”

The first half dozen “shots” resulted in the muzzle of the gun dipping down as the hammer fell. He got it under control and after he had “fired” probably 20 in a row holding it rock steady I told him I was going to either have a live round in the chamber for him or it might be empty.

He again had a steady muzzle for five or six rounds before I put a live one in the chamber. It was on target. More empties and another live one. Again on target.

We talked about it for a while and he then wanted to shoot a few more rounds knowing they were all live. The top three holes below were the result: 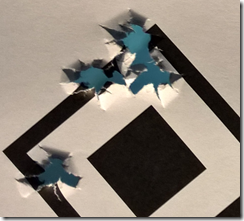 He asked about how to aim. I explained and he said that because his guns always shot lower than than that he would always aim a little higher than what I suggested. He tried aiming as I suggested and the hole at 9:00 on the target above was the result. Close enough. I told him to go home and do lots of dry fire exercises before going to the range again. And consider getting a .22 to practice with. It will take a while to get the bad habit out of his trigger finger and dry firing 10 rounds for every one live round is what my instructors recommend.

As we left I pointed out the Insights Training flyers in the hallway to the ranges and he and I both picked up a few. He seemed very interested in taking a class and thanked me for helping him.

We went back to work where I gave the flyers I had picked up to the woman I had talked to yesterday and I figured I had done my good deeds for the day.

Changing our culture. One new shooter at a time.

7 thoughts on “Before and after”