My brother Scott passed away. From what we know, he was sitting at his computer desk and just fell over.

He was supposed to arrive in Phoenix around midnight last night and when we didn’t hear from him by this morning we started making phone calls.

We were able to get a deputy out to his apartment and have the office open the door. The chain was still latched from the inside but nobody responded. The fire department was called to enter the apartment and they found him there. A detective was brought in and said there was no sign of foul play. Given the family history with heart conditions and his many years of smoking, they’re guessing it was a heart attack. A medical examiner was supposed to do an autopsy on Monday but it sounds like they’re just going to do an “external examination”.

Scott absolutely loved the Boomershoot, and he loved sharing it with me, my wife Rachel, and our nephew Cody. He looked forward to it every year and planned ahead for it. He’d come to Phoenix for Thanksgiving and Christmas, but the only other time he’d travel anywhere was the annual trek to Idaho so he could enjoy the event you put on.

I wanted to write and tell you the sad news, but also to thank you. The Boomershoot gave us a few extra days every year to hang out and have a good time together.

Here he is cleaning equipment after making targets at Boomershoot Mecca May 2nd, 2014: 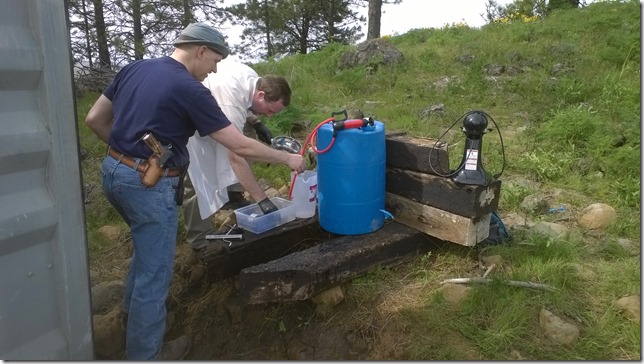 Near the tree line May 2nd, 2015 with his brother Brian on the left, sister-in-law Rachel in the middle and Scott on the right. I don’t know the name of the guy wearing camouflage: 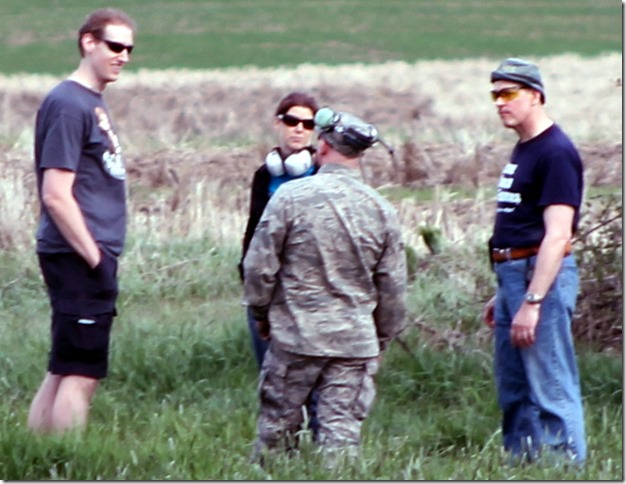 After a couple years of attending he volunteered to help. I accepted and he was always the first person, after me, to arrive. He brought the 200 foot tape we used to mark the shooting positions each year. He helped make the targets. He helped pound stakes, place targets, and came up with new ideas to make Boomershoot better. Each year he brought the two steel targets we would put on the hillside between 550 and 700 yards from the shooting line. If you hear the clang of a bullet on steel in any of the Boomershoot videos during the main event on Sunday it was almost for certain from one of Scott’s targets being hit.

The last several years he always picked shooting position number 46. This is in the “Main” section just to the left of the berm.

He also left a few comments here on this blog. There are 29 comments by my count. Here are some of the better ones:

Other blog posts that make mention of Scott:

He was 53 years old. That is much too young to die.

Scott will be greatly missed.—Joe]

9 thoughts on “Quote of the day—Brian Keszler”