Barb and I were on vacation for the last week. Friday (October 16th) we left home about noon and drove to West Port, Washington (on the coast) to visit friends for the weekend.

I saw a couple stickers on a car that indicated I was near “my kind of people”:

On Sunday morning we drove to the Seattle-Tacoma airport and flew to Las Vegas, arriving about 7:00 PM. We then drove to Brian Head, Utah arriving about 2:00 AM local time.

It was an interesting drive from Las Vegas to Brian Head. Just getting the rental car was an adventure. We “got a good deal” on a Jeep (I need lots of headroom) via Fox Rent A Car. When we checked in they told us it was an extra $10/day for a second driver. So much for the “good deal”.

We loaded all our stuff into the Jeep and started to leave when I noticed the low tire pressure light was on. I reported it and they said to take a different Jeep. We loaded our stuff into and started the car and the “Oil Change” light came on. We reported it and checked out the only small SUV remaining, a Rav 4. By adjusting the seat to the lowest position I could sit in by tipping my head to the side just a bit. And it smelled strongly of cigarette smoke. We were discussing going to a different rental agency when another Jeep, freshly washed showed up. We inspected it, found nothing wrong, and moved all our stuff into it and drove away. It wasn’t until two days later that we discovered the right rear door would not lock. We won’t be renting from Fox Rent A Car again.

The weather apps on our phones warned of heavy rains and flash floods all the way to Cedar City. The speed limit was 80 MPH on much of the interstate freeway in Utah but with the heavy rains I seldom drove over 55 MPH.

We needed to get some groceries and according to our research prior to leaving home there was a 24-hour Wal-Mart Super store in town. We arrived about 12:40 AM to find the store was closed. We drove around a bit and found a grocery store which was open. Barb went in and started shopping while I parked the car. When I walked in I was told they were closing in seven minutes. Barb and I coordinated our searches and dashed all over the store picking up various items. It was a bit of a hodgepodge of stuff and few things that weren’t quite what we thought we had grabbed off the shelves but it was good enough and we laughed at ourselves as we went through checkout.

We continued on to our condo at Brian Head, climbing up to 9800 feet above sea level, with the last mile or so pushing slush and snow ahead of the Jeep. We got into bed about 2:00 AM.

The next morning, Monday, we felt ill. I recognized the symptoms. It was altitude sickness. I would get dizzy every time I changed from a sitting or bending over position to standing. I was sometimes gasping for breath. We considered just staying there and getting better before we continued on to the National Parks. Barb looked up the symptoms and treatments on the Internet. Symptoms are similar to having drank too much alcohol and a hangover. Hmmm… so that’s what a hangover feels like. I’ve never had a hangover before. The treatment is to go to a lower altitude. You can avoid it by acclimating more slowly. Gain about 3000 feet per day they said. Great. We exceeded the recommended altitude gain per day by a factor of 3.27. No wonder we were feeling messed up.

All the National Parks we were visiting were at a lower altitudes so we decided to continue on schedule in the hopes of feeling better when we got to lower ground. We went to Bryce Canyon, at an elevation of over 8000 feet, and went on a three mile hike down and then up out of the steep canyon. 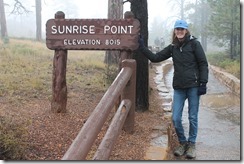 We felt much better…

Details on our adventures with lots of pictures to follow in more blog posts.