As I reported last weekend I put all my polymer coated lead bullets through a max case gauge and still had problems with my new STI. I had saved one of those cartridges to diagnose the problem.

The cartridge still failed to chamber when stripped off the magazine by the slide when I tried it again at home. The bullet in that cartridge was seated too deep by about 0.040”. None of the others were too deep so I suspect it happened during the chambering of the cartridge. I pulled the bullet and reseated it at the proper depth and it chambered just fine. Hmmm… maybe the crimp just isn’t tight enough, the bullet gets driven deeper into the case, then the cartridge fails to nose down into the chamber as it comes off the magazine.

I shot in another steel match yesterday to get more samples.* On the first stage the first few strings went fine then a round failed to chamber the entire depth. I couldn’t pull the slide back. The gun was essentially locked up. I dropped the magazine, held tight to the slide then pounded the grip forward with the web and palm of my hand. The extractor pulled the round out and it was ejected. I put in a fresh magazine and completed the string in 17.xx seconds. I switched to my Montana Gold JHP handloads for the rest of the match and had no more problems.

I brought home the problem round and put in the case gauge. It fit just fine. I put it in a magazine and tried to to chamber it. It failed to chamber all the way. I tried dropping it directly into the chamber and dropping the slide. It chambered but again I couldn’t extract it without slamming my hand into the grip.

But the round fits just fine in the case gauge!

These pictures are of the same cartridge in two different case gauges: 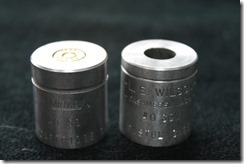 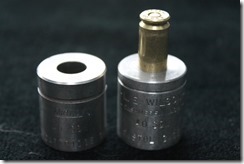 In the picture on the left I applied a couple ounces of pressure to get it to seat all the way. In the second picture I put the maximum amount of pressure I could comfortably apply with my thumb to get it in that far.

So why is just the ammo with the polymer coated lead bullets giving me problems?

Here is the cartridge: 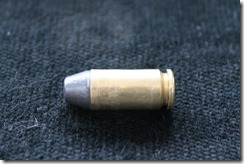 You can’t really see it but you can feel a bulge where the base of the bullet is in the cartridge.

I might be able to use the Midway gauge for some other gun(s).

Scary thought… Can you imagine needing your gun in a life or death situation and losing the fight because of two thousands of an inch?

* I can’t use this ammo at indoor ranges and I don’t have easy access to any outdoor ranges except when I shoot at matches.

** Not all cartridges with polymer coated lead bullets fail the tighter case gauge. Only some of them fail.

18 thoughts on “Two thousandths of an inch”