Yesterday I picked up a new gun to replace the old one which died at a match on April 19th. 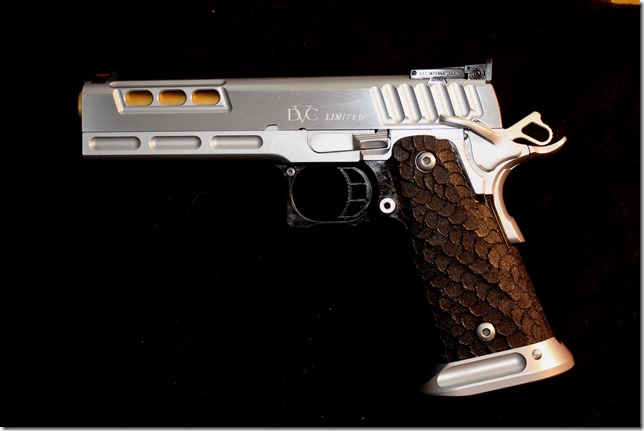 It’s another STI. This time a DVC Limited. Again it’s chambered in .40 S&W.

I didn’t realize it but this gun was just introduced at Shot Show this year and they are hard to get. I was going to get another STI Eagle but I saw this on the STI website in mid March and called around trying to find one.I asked the local gun shop if they could get me a good deal on one and after calling their distributors and STI found they could not. Only authorized dealers can get them. There are only three dealers within 100 miles of me. One told me I could get delivery in September. Another told me delivery “by the end of the year”. Another dealer told me they were on sale if I ordered by the end of the month and I would get it “in April or May”. It would have been nice to just “go pick it up” but April or May was a lot better than September or the end of the year. And getting it below MSRP was a big bonus. I ordered the gun and then less than a month later the STI I purchased in 1997 and carried almost daily died.

Getting the gun was a big thrill and I checked the holster fit before I getting in my car. It fit both my competition holster and my IWB carry holster. It was a little tight in the carry holster but not a big deal. I loaded it up and it felt so good to have a STI on my hip again.

I had been carrying my Ruger P-89 in the Alien Gear IWB holster but after a few hours it was uncomfortable. And when I bent over to lift something the gun would pop most of the way out of the holster. I used to have Kramer holster for it but couldn’t find it.

I stopped off at the range before coming home. I shot factory ammo which I had known to be accurate in my old STI but it was a huge disappointment in this gun.

I was about to give up and go home and decided to just empty the magazine. The last couple of rounds went about six or eight inches right of my point of aim on a target 21 feet away. Oh! I need to check something.

I tipped the gun to the left as I brought it closer to look at it and the front sight fell off:

That happened with my first STI after a few hundred rounds when I first got it.

I put a 0.004 shim of plastic under the front sight and carefully tapped it into place just like I had done with my first STI.

I went to the range again today and the results were much better. I adjusted the sights for a 25 yard zero and tried it again at 7 yards.

This is five rounds, off hand, from 7 yards away with some of my Montana Gold handloads: 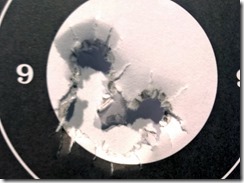 This is five rounds, off hand, from 25 yards: 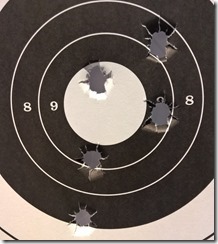 Okay. That’s more like it! Most of the group dispersion is probably just my aging eyes in the relatively low light of the indoor range and the tremors in my hands and arms.

It’s been many years since I could get groups like that with my STI Eagle. I had been wondering if it was my aging fire control system or the gun. I’m pretty sure I can say it was the gun. The slide to frame fit on the Eagle was never very good. The gunsmith who assembled the kit had deliberately put it together with loose tolerances for reliable carry. After 40K rounds through it the tolerance probably increased enough to make the difference that I suspected were aging of the flesh rather than wear of the gun.

The first thing I did with the DVC Limited, assembled by STI, was check the slide to frame fit. I cannot detect any movement at all. It has to be on the order of 0.001” or less gap. Same with the barrel. No detectable motion when I try to wiggle it.

I’m very pleased now that the front sight is staying in place. I can’t wait for the next match.