Update: From the comments I discovered Miculek used a 400 yard zero for his revolver, not the 200 yard zero I hypothesized. I have updated the post accordingly.

The other day Say Uncle posted this video of Jerry Miculek shooting at a balloon from 1000 yards away with a 9mm revolver:

First off, as Rivrdog noted, he didn’t hit the balloon. He hit the steel and the splatter from the bullet fragments popped the balloon.

Second, I decided to run the numbers on those shots. Using Modern Ballistics, the bullet Miculek said he used, with a muzzle velocity of 1000 fps (Hornady factory ammo with a four inch barrel is 975 fps but I added some extra velocity because Miculek probably has a longer barrel and a custom load), with a standard deviation of 10 fps, a bullet delivering a five shot group size of 1 MOA under ideal conditions, a wind estimation error of 0.2 MPH, sea level, at 59F, and a 400 yard zero. We end up with the following results.

This first graph shows the height in inches from the point of aim. At the target the bullet is hitting over 2900 inches low. That is over 240 feet below the point of aim!

In this graph the rate of descent at the 1000 yard mark is shown. That is nearly 11 inches of additional drop for each yard of travel.

Here we have the odds of getting a hit if the shooter knew the exact ballistics and compensates perfectly for every shot. The random variation of the muzzle velocity, wind variation (Gaussian distribution with a standard deviation of 0.2 MPH), and inherent variations in the bullet contribute enough error that only about a third of the bullets would hit a target 30 inches wide and 50 inches tall. 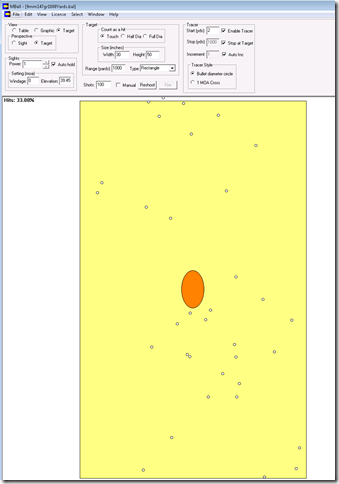 The image below is what the shooter would see with a red-dot sight shooting a tracer bullet with the same drag. I added some wind to make the perspective a little better. At 1.6 yards the bullet crosses the near zero and you can see the red-dot of the sight just before the track of the tracer starts. The tracer ignites at 2 yards. Everything is to scale so change the size of the image such that the base of the 9mm bullet looks the same in the image as a 9mm bullet would at 1.6 yards and you can see what the 30 x 50 inch target would look like at 1000 yards. 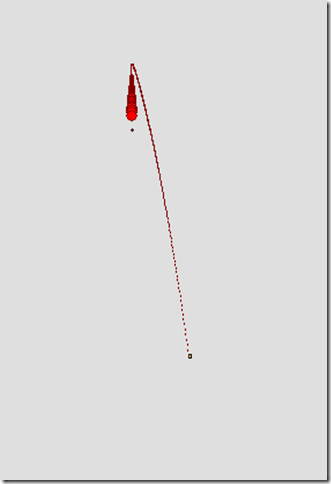 Jerry is at the peak of human shooting ability but he had some serious luck on that shot.