Why don’t you do this every day?

[This was after shooting a dozen or so boomers at a surprise private Boomershoot party. It was for his birthday.

Ben and three others drove from the Seattle area to the Boomershoot site. There they helped Barb and I make about 60 reactive targets and clean up Mecca. We then went to the tree-line and while Barb mounted the targets on stakes I gave them some safety and shooting instructions.

They were all essentially new shooters. I positioned them about 30 yards away and with an AR equipped with a low powered scope shot from a bench. The seven inch targets were easy pickings. There were almost zero misses.

Only one of them had ever fired an AR style rifle. Occasionally I had to remind them of one of the safety rules but they did well. And of course that new shooter smile was made all the bigger with his first shot detonating a boomer.. 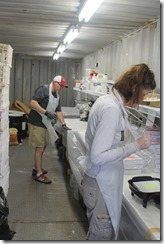 Cleaning up Mecca while Barb shrink-wraps the rest of the targets. 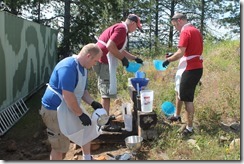 Cleaning up the mixing equipment.