My former apartment manager, Mila, and I used to talk about guns and stuff. She was very interested but her boyfriend was really opposed to it and so she never took me up on my offers to take her to the range. I moved last September and hadn’t had any contact with her since then. But one of the last things I told her was to let me know if she ever wanted to go shooting. She had broke up with the guy and gotten back together a few times so I wasn’t too surprised when last week she sent me a text message asking if I was still into guns and if I would take her and her new boyfriend, Tim, shooting.

Her new boyfriend is “really into guns” and even gave her son a 9mm handgun for his 13th birthday. He hasn’t had but just the most fundamental safety training and he was all for her getting some training from someone with formal training experience. So the three of us went to the range today.

I spent a few minutes with a plastic training gun to teach grip, stanch, sight picture, and the safety rules. Then we went into the range and started with a semi-auto .22. She had problems with the sight alignment and was shooting high and to the left, but with a pretty good group. I let her shoot a couple magazines and then worked with her on sight picture. On the second target things started clicking for her and she did well: 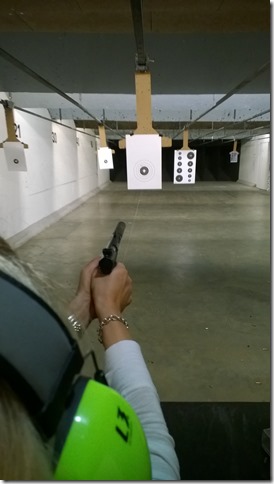 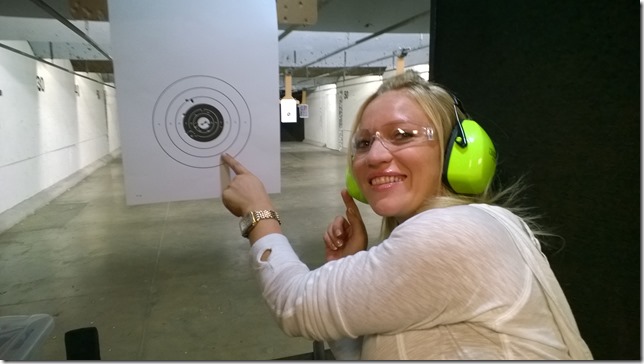 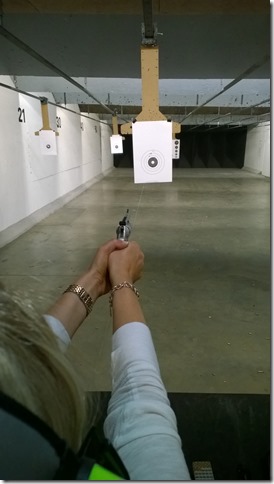 She was very enthusiastic and kept saying again and again how much fun this was. She said she wants to get a gun now and that she has a girl friend that has a gun and that I need to go to the range with both of them and teach her too.

Her boyfriend was in the booth next to us and was shooting his .45. He is cross-eye dominate and we talked about how to deal with that. He tried shooting weak handed, moving his head over to get better alignment, and just closing his dominate eye. Closing the dominate eye worked best for him. He also had numerous rounds that failed to fire. He showed me the cartridges and they had very light primer strikes. I suggested that the next time he cleans the gun that he clean and lubricate the firing pin and firing pin channel and then try it again.

We then went out to lunch. I invited Barb and she met us and we all had lunch together.

This is how we win the culture war. The anti-gun people don’t have anything to compete with what we have to offer.