A month ago I went to the range with two new shooters. These are my tweets from then:

At the range with new shooters. pic.twitter.com/I5GDcXoqFs

The other new shooter. pic.twitter.com/guJgiwYrvD

They are friends of Gang who I took to the range a few years ago. He contacted me and told me some friends wanted to learn to shoot. We met up at Wades and after they got the paperwork done I spent about 15 minutes going through safety rules, sight alignment, and grip with a plastic gun. Once inside the range we did some dry fire before going to live fire.

I started them out on a Ruger Mark III/45 followed by a S&W .22LR revolver. Then I offered them my STI Eagle in .40 S&W with the caution there was going to be a lot more recoil. They did just fine with the recoil on the .40 but the large grip of the double stack STI was a challenge for their small hands. All the targets were at about eight feet away.

I was surprised they liked the S&W revolver and STI Eagle better than the Ruger Mark III/45. In any case they did very well. I was particularly impressed with Shijing who is cross eye dominate. I suggested she try shooting left handed as well as right handed and she then stayed with left handed to produce awesome groups for a new shooter. 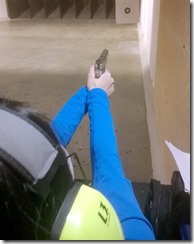 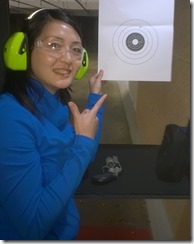 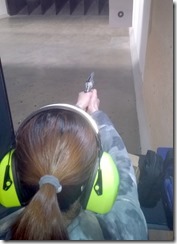 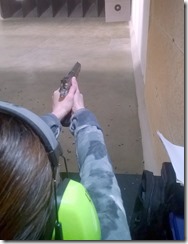 Shijing with the revolver and then the STI. 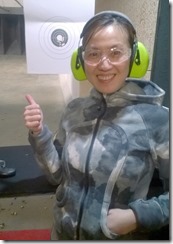 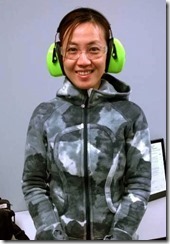 Shijing had the better groups and the bigger smile.

Afterward they took me to dinner at a place Gang described as the Chinese equivalent of Hooters. I have never been to Hooters before so I can’t confirm that assessment but the waitresses were very nice looking and somewhat scantly dressed. The food was good and I plan to take Barb there sometime soon.

We talked quite a bit about gun laws and why I carry a gun. They seemed to get it and expressed interest in getting their own guns.

Winning the cultural war one (or two) new shooter(s) at a time.