Barb spent soon time in Idaho with me this week. Dad wanted her to see how much better the room in basement was since she was there the last time. After Dad showed off the improvements I saw something in the gun cabinet I wanted to show her. 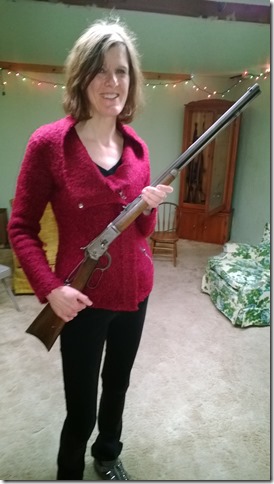 It was the old Winchester 32-20 that had hung on the wall of my bedroom for many years as I grew up. It had belonged to my grandfather and my Great Uncle Walt (Grandpa Huffman’s brother) had shot his first coyote with it when he was 10 years old.

Under some of the more repressive laws in this country it is banned as being an assault rifle because it has a capacity of greater 10 rounds. But as it was originally used it was a great gun for kids because of it’s light weight, relatively low cost to shoot, and light recoil.