The headline is 40 Armed Gun Advocates Intimidate Mothers Against Gun Violence In A Restaurant Parking Lot. 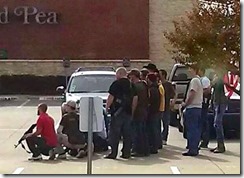 The text starts out as :

On Saturday, nearly 40 armed men, women, and children waited outside a Dallas, Texas area restaurant to protest a membership meeting for the state chapter of Moms Demand Action for Gun Sense in America, a gun safety advocacy group formed in the aftermath of the Sandy Hook Elementary School shooting.

According to a spokeswoman for Moms Demand Action (MDA), the moms were inside the Blue Mesa Grill when members of Open Carry Texas (OCT) — an open carry advocacy group — “pull[ed] up in the parking lot and start[ed] getting guns out of their trunks.” The group then waited in the parking lot for the four MDA members to come out. The spokeswoman said that the restaurant manager did not want to call 911, for fear of “inciting a riot” and waited for the gun advocates to leave. The group moved to a nearby Hooters after approximately two hours. 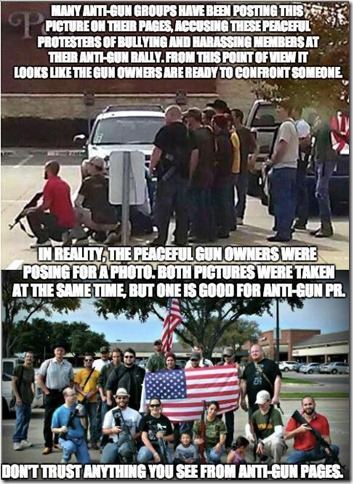 Because the truth destroys their agenda.

24 thoughts on “Truth destroys their agenda”