On October 1st the Connecticut State Legislature’s reactionary response to the tragedy at Sandy Hook Elementary school went into effect. Public Act No. 13-3 requires all people that voluntarily admit to a hospital for mental health reasons (not solely for drug or alcohol treatment) have their names placed in a database administered by the Department of Mental Health and Addiction Services – for the purpose of automatic suspension of Second Amendment rights. This database will link with a database held by the state police that includes all gun permit holders, registered gun owners and anyone who has applied for a gun permit. If there is a “match” between the two databases a letter will go out informing the individual that their Second Amendment rights have been suspended (letter below). Although you will not receive a letter from the state police, if you are not a “match” you will be notified of your name being put in the database and of the suspension of Second Amendment rights sometime after voluntary admission. The law does not require notice be given to people prior to admitting themselves into a hospital. 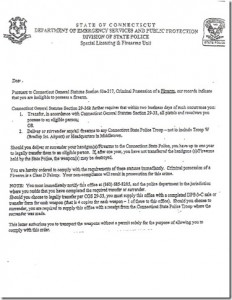 H/T To Andrew T. from the gun email list at work.