My blogging activity has been pretty meager the last few days. First it was the guests we had for the holidays then I spent a lot of time on Boomershoot stuff. This is a post about some of the Boomershoot stuff.

I purchased an ATT Microcell to put on site so that I could have cell service at Boomershoot without switching carriers. It requires a solid high speed Internet connection with low latency. The existing connection was via satellite and it wasn’t even close to good enough. My brother Gary has a good connection a mile or so away and while I didn’t have line of sight to his place from Boomershoot I did have the ability to pick up the Wi-Fi signal from the T.V. antenna mast of the neighbors house. I spent all day Wednesday (December 28th) in the rain climbing up and down the roof of my brother’s house putting up a Nanostation 2. This was more challenging that most roofs because it was very steep and made of slick steel. Smooth steel in the cold rain. That little exercise involved parking my vehicle on the other side of the house to attach a rope to, using two ladders, and laying face down on the wet roof. I got soaking wet. In North Central Idaho. In late December. But it was going to be worth it. Right?

I first measured the signal strength with the unit attached to the top of a ladder. It was good, about -55 dBm. I need at least -75 dBm to get a semi-reliable connection. After I had it all mounted and powered it up again the signal strength was about -82 dBm. What? How could that be? It was higher than on the ladder and even though it still wasn’t high enough to get line of site to the neighbor’s house it should have been better.

I moved the vehicle back around to the other side of the house did the thing with the rope and two ladders and getting soaking wet again to tweak the position. I turned the antenna a little bit and the signal strength looked great again. I came back down. Still good. Nice.

I came back the next day (Thursday) to finish up on the inside of the house with putting an end on the Ethernet cable I pushed through the wall and routing the cable on the inside in a neat and tidy manner. I connected it all up and tried connecting to the Wi-Fi access point at Mecca two hops away. Pings were erratic. Sometimes they were 4 mS and sometimes they would time out. I measured the signal strength again. It was bouncing all over. -85 sometimes and the mid -60s at others. I rebooted units, changed antenna polarizations, and all kinds of things on both units involved. Nothing helped. The signal strength was just not dependable.

Friday (yesterday) morning I visited the only non-satellite high speed Internet provider office for that location (their office is in Moscow, where I live) to talk to them about getting a direct connection. They wanted an address.

It’s in the middle of a field:

There is no “address”.

This seemed to be a bit of a problem for them. I told them it was a shipping container where I had solar charged batteries for electricity. I finally allowed them to believe it was a construction site (we construct targets there, right?). Then they wanted to know how long construction would be going on. “Several years” seemed to suck the brains right out of them because they stood there with slack faces without saying a word. I finally explained that I hold a shooting event there every year and we construct the targets for the event there. I run the event with web based software, I need a good Internet connection to run the AT&T Microcell so I could make emergency services calls if needed, and a large number of bloggers attend and they appreciate having free Wi-Fi. I go out there several times a year to check on things and do tests. I use the Internet a lot and will continue to do so.

The blank stares slowly faded and they started talking again. After about 20 minutes they agreed to send someone out “sometime soon” to do a “site survey”. I had requested one back in August or September without them following through so I wasn’t exactly convinced they were wanting my business so I pushed them pretty hard for a firm date. They told me I was about number 94 on their list and it would be a while.

It was now my turn to be speechless for a few seconds.

I then told them the site had a great view of the mountain top where their access point is and it is closer than my brother Gary who subscribes to their service. The site survey really isn’t necessary. Could they just send someone out right now, while I was going to be there, and connect me up? And I’m almost never around on weekdays since I work in Seattle… Nope. That was impossible.

More pushing for a date and they said maybe in a couple weeks. And they might even be able to do it on a weekend when I was there. They took my number and promised to get back in touch when they had a firm date.

I spent the rest of the day tidying up Mecca. I put in the RIGrunner and routed wires a little neater and more permanently (still much to be done). I unpacked all the mixing table stuff and spread it out on the tables to see how it might work with the new layout. This was potentially important to get done yesterday because Ry thought he might be bringing over a new shooter today. I wanted the place ready to produce targets with minimal time spent unpacking and getting ready to actually make targets. It turns out the new shooter backed out so it didn’t matter that much. 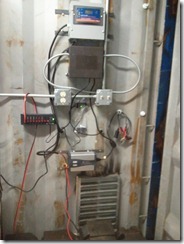 The boxes would normally be folded and ready to be filled but the layout was good enough to see that it should work out.

We will probably go back out with a small crew sometime in the next couple of months and do some testing just to make sure but so far, except for the Internet connection, I’m very pleased with the new explosives production facility.