I have had lots of experience with rifle ammunition being the cause of extreme inaccuracy. But I had not seen a huge difference in accuracy with handguns. Shooting offhand at handgun distances I just couldn’t see it making that much of a difference. For nearly all my purposes I just didn’t think it could matter when the human error was going to dominate (I thought) the results.

When loading rifle ammo for accuracy I measure each charge down to the 0.1 grain. I measure and trim the necks of the shell casing which are all of the same brand. I clean the primer pocket. I weight the cases. I use a special seating die that aligns the bullet precisely. I use match grade bullets. I sometimes weigh and sort all the bullets. All total, each round takes about two minutes of my time to assemble.

When reloading for pistol I shop around for the cheapest bullets I can find. I use whatever cases of whatever brand I happen to find on the range. I load 300 to 400 rounds per hour.

As I reported a couple weeks ago I discovered some cheap gun show pistol ammo was key-holing once the range exceeded about 30 feet. This was 180 grain .40 S&W BVAC remanufactured ammo.

The ammo will still work fine for USPSA short range practice on the indoor range which doesn’t allow lead bullets. But for an actual match or where the range exceeds 30 feet I needed something better. I had some 180 grain Montana Gold JHP bullets that I loaded up last weekend with 6.0 grains of VV N350 in mixed casings with Winchester primers.  Yesterday I tested my loads. I also tested my carry ammo, 180 grain Winchester Ranger in .40 S&W, and some other cheap ammo I bought at Wal-Mart a year ago.

Here are the results from shooting offhand at 75’. Some of the outliers are my fault but you should still get the idea: 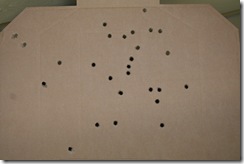 This is my target from two weeks ago with the BVAC ammo. 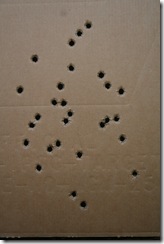 This is another tests of the BVAC ammo (8” group). 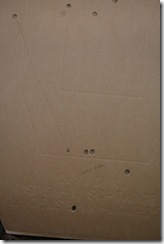 This is another test of the BVAC ammo. Ignore the 2.5 holes at the top center. They do not belong to the same group. That outlier at the top left was not my fault. I know when I pull the trigger wrong. This was not one of those times. 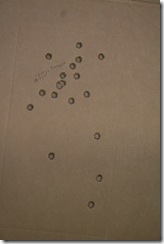 This is 180 grain Winchester Ranger ammo that I carry on a daily basis. The four holes at the bottom are probably my fault. 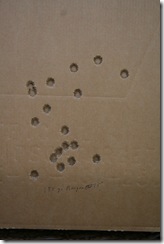 This is 135 grain Winchester Ranger ammo. 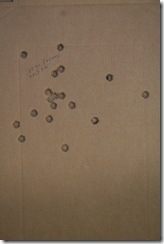 This is 180 grain Federal FMJ AN from Wal-Mart. 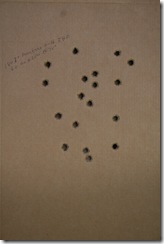 It looks like I have some new loads that work well in my gun and that are welcome at indoor ranges.

3 thoughts on “Ammo makes a difference”