I have known for a long time that often something strange happens out between 30 and 40 feet when shooting my STI Eagle 5.1 (chambered in .40 S&W). The groups get much larger. At about 20 feet I can almost keep it on ragged hole even when shooting unsupported. But at 40 feet it’s about 6” to 8” groups. At 75 feet they will just barely stay on an USPA target.

I went to the range today and finally figured it out. Below are three different bullet holes from a target at 75’ feet. 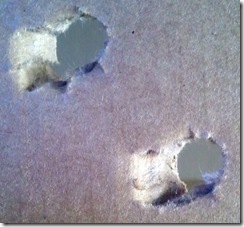 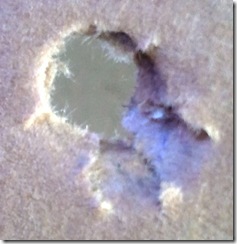 The same thing could be seen at 40’ but less frequently. On the 40’ target, which used a different type of paper you could actually see an imprint of the side of the bullet.

This was cheap “gun show ammo” in 180 grain FMJ but I’m pretty sure it happens with at least some of my hand loads too.

I have some 180 grain Montana Gold HPs that I should load up and see if they give me the better results. Fellow shooter Don W. told me a year or more ago that he did experiments with various bullets with his STI chambered in .40 S&W and the Montana Gold 180 grain HP gave him much better accuracy than the FMJs.

I think I will have a chance to do the tests next weekend.