I finished up Monster Hunter International on Friday and started Monster Hunter Vendetta. There was so much mention made of Owen Z. Pitt’s specially modified Saiga shotgun which he calls “Abomination” that I had to get mine (stock configuration with none of Milow’s modifications) out and do a little shot gunning. Wal-Mart didn’t have any silver buckshot but they had Federal 00 in both 2.75 (9 pellets) and 3 inch magnum shells (15 pellets).

So today I shot up a couple USPSA targets: 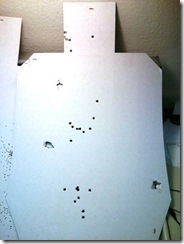 Above is three shots of the 2.75” shells from 30’ away. One to the head, one to the center of the body, and one to the lower part of the body. The large holes are the wadding.

Unless there were a specific need for the extra payload I don’t see any need to use the harder recoiling 3” shells. My guess is that when firing multiple shots I can get just as much lead on target in the same amount of time with the 2.75” shells as I can with the 3” shells.

I also dumped a couple twelve round magazines of birdshot on some steel targets as fast as I could acquire a sight picture. That was fun and very invigorating. I need to do that more often.

Getting back to the books. These are really good books. I don’t even mind that Owen’s evil werewolf boss had the same name as my Grandfather. I do wish the troll was named MIkeB302000 instead of Melvin but I suppose that would be insulting to trolls and there might consequences.

And I can’t help but think that our gnome loving, daughter Xenia really should read the gnome fight scene.