The culvert I put in a few years ago needed some fill on both sides to make it more level rather than just a mound over the culvert with increasingly deep holes on either side. 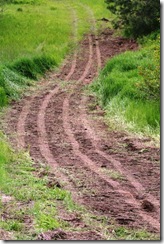 But if we finish the new production facility this culvert won’t get nearly as much use as it has in the past so it might not really matter.

A couple weeks ago Barron and Janelle got their pickup stuck when they showed up to help at a private party: 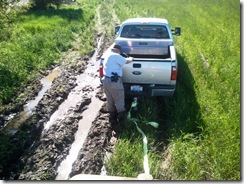 All the traffic during Boomershoot left some big ruts but the stuck pickup made them even worse: 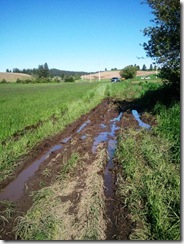 So I smoothed those out a little bit: 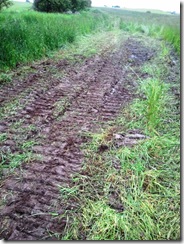 The first Boomershoot explosives storage magazine hasn’t been used in many years and even though I should have taken it out a long time ago I had some sort of attachment to it. When the ATF visited last month the inspector seemed to be taking more interest in it that I was really comfortable with. It hadn’t been “up to snuff” for quite some time but I didn’t think it mattered since I wasn’t using it anyway. But she was making notes even though I told her I would take it out this summer sometime. Rather than risk some sort of requirement that I repair it I decided to take it out today while I had the cat there to break up the concrete blocks. 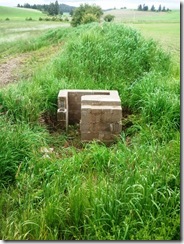 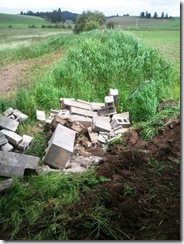 Later this summer after the hay has been taken off the field I’ll salvage what I can from the remnants and haul off the rest of the pieces.