Via email from Ry: 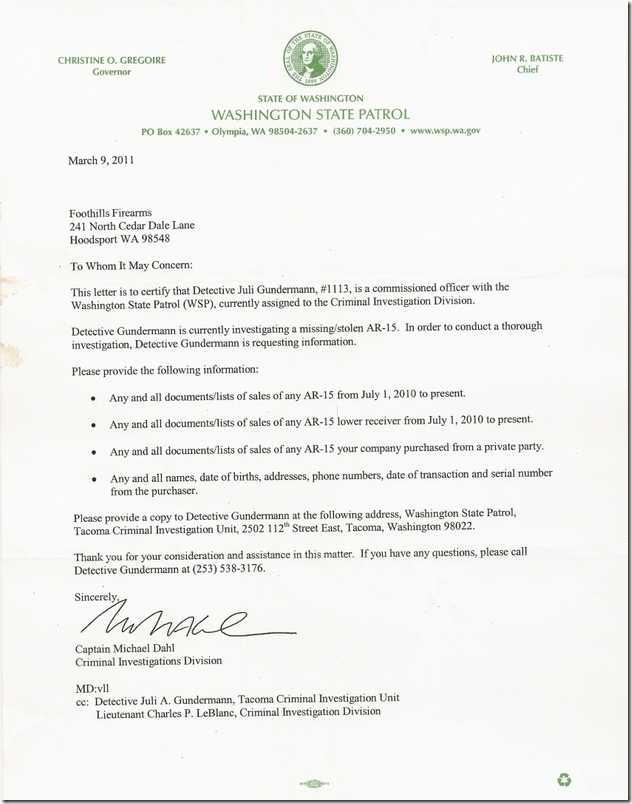 This is an interesting way to have your guns registered—the police just ask. What would the public response be if they were asking about Koran, “Heather Has Two Mommies”, or “Earth in the Balance” sales?

Earlier this week most, if not all, firearms dealers in Washington received a letter from the Washington State Patrol asking for data on ALL AR-15s (and clones) and AR-15 lower receivers sold or purchased by the dealers over the past nine months. The information sought was reportedly requested pursuant to an investigation of a stolen AR-15.

Apparently the ATF (who has jurisdiction over tracing stolen firearms) was not consulted by the WSP before they initiated their query. It would appear the WSP request FAR EXCEEDED their authority to seek such information. It typically would take a subpoena to gain access to such a broad sweep of transaction records. And that would have to be signed by a judge, after presentation of sufficient probable cause.

It is my understanding most dealers politely declined to comply, as was their right. The Bellevue-based Second Amendment Foundation jumped right into this issue. Meanwhile, in addition to ATF asking questions (of the WSP), several state legislators want to know what’s going on.

Local law enforcement has much more limited authority in cases like this. I suspect this was simple overreach by an over-zealous and perhaps inexperienced WSP detective. At least I hope that’s what it was. Eternal vigilance remains the price of liberty!

21 thoughts on “Tell us all your AR-15 purchasers”