A few years ago a friend of mine and I were talking about nuclear bombs and he said something about all the scientists involved with the development of “The Bomb” were now dead. I told him, “No. Johnston is still alive.” “Who is Johnston?” Johnston, I told him, was the guy that invented the detonators. After the war he was a physics professor at the University of Idaho and still lives in Moscow. I’m not sure my friend really believed me. Why would someone with a background like that end up in a backwater college like the U of I? I disputed this. The U of I has done quite well for itself and has nothing to be ashamed of—well, except for perhaps Larry “Wide Stance” Craig. Other famous graduates or professors include Sarah Palin in the class of 1987, Dan O’Brien (class of ’93), and Margrit Von Braun (daughter of Wernher von Braun).

Back to Johnston—I got my undergraduate degree at the U of I and took several physics classes there. But none of them were with Johnston even though he was there at the time (’67 –> ’88). But I would occasionally see mention of him in the news and I was proud to have him in my home town.

Last week wife and physical therapist Barbara called me up and excitedly asked me, “Do you know who I have as my patient?” “No. You don’t tell me that information unless you get permission from the patient and you haven’t done that for several weeks now.” My taking her literally somehow didn’t damping her spirits as it usually does and she went on to tell me that it was one of the scientist who worked on the first atomic bomb. “Johnston?”, I asked. “Yes. How did you know?”, her spirits finally dampened a tad. “Because he is the only one left and he lives in Moscow”, I explained.

She went on to tell me he gave her permission to talk to me about him, he was a really nice guy, is 92 years old, is the only person to have witnessed all three of the first atomic bomb explosions (he was in the observation planes over Hiroshima and Nagasaki), and he would be interested to exchange email with me. “Uhhh…. WOW!” was about all I could say.

I did exchange email with him and he sent me a presentation he made at Los Alamos a few years ago about his experiences developing and deploying the first nuclear bombs. I found it fascinating. My QOTD tomorrow will come from that presentation. And despite the detailed info in the presentation about the explosives and detonators used and the requests for “upgrading” beyond chemical explosives at Boomershoot I have no plans to pursue that particular line of experiments at this time.

Thank you Barbara and Professor Johnston. 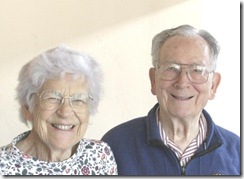