Since I’m on “The Location Team” for Windows Phone 7 I sometimes get feedback on location usage and applications that use location information. The story below came in today and it brought tears to my eyes. I asked Afshan if I could post her story and she graciously allowed me to do so:

Here is a story of my WP7.  It all started 45 miles away from Bellevue in Snoqualmie Pass where I enjoyed the best day of skiing with a bunch of friends in fresh powder. We left the resort in high spirits, talking about the highlights of the day when I decided to reach for my phone. I searched my empty jacket but no luck. I thought, not a problem at all, it is probably in the bag pack but still no luck. Umm, over here? Empty. We were almost half way back to Bellevue. I called my friend who was in a separate car. We were on the slopes together and she borrowed the phone from me; probably she forgot to give it back, but still no luck.

Slowly the realization grew into an empty black hole devouring all happiness – I just lost my new phone. (Ok not that long, but along those lines!). The worst part was I didn’t have a clue where I dropped it. The question was is it alive or dead?  I started cursing myself that things could have been different if I would have not been so over confident about being a responsible person and purchased the phone insurance. But well some things in life happen for a reason. We seem to gain wisdom readily through all failures than through our successes.

While I was blaming myself in the car, one of my friends suggested that I should try using ‘Find My Phone’ feature to detect the phone location. At last! a sign of hope. The other iPhone user friend in the car goes ‘You can’t use that feature unless you have subscription. At least that’s how it works for iPhones’. After hearing this conversation back and forth I didn’t lose hope. After all I’ve had the phone for a short time and I wasn’t ready to give up. This was simply not acceptable.

As soon as I reached the friend’s house who was driving, I immediately logged in to my live account and desperately looked up the option for ‘Find my Phone’.  Within a few seconds I found this life saving feature and clicked on the button to detect my Samsung Focus location co-ordinates on Bing maps. Keeping my fingers crossed for the longest 30 seconds of my life, hoping I don’t require subscription and boom, I see the results. The phone was resting at Snoqualmie Pass 250 yards from interstate 909 road. This was such a  relief. Even if I don’t recover the phone, at least I know what happened  to it.

When my friend saw my crying and helpless face, he offered a ride back to the resort. He was also an owner of WP7. Almost after 1 hour of driving, we got there. Now all we had to track the lost phone was through a memorized picture of Bing maps in our brains… around 9pm on a Sunday night in a closed ski resort, leaving us in the frigid cold and pitch dark slopes. You could see the clouds surrounding the moonlight and even random flurries. We had no option but to search by stumbling around the ice and snow within the area of what Bing map was showing with the help of our flash light. Immediately an idea popped up that why don’t we just detect the friend’s WP7 location co-ordinates and then compare the two pictures of the map and track it from there. My friend called another friend who had access to a PC and asked her to log in to his windows live account to detect his phone’s location co-ordinates. You can think of this friend at home as a control tower. Once the CT had the two pictures in front of her she was able to guide how far we were from the lost phone. How much further we need to move and most importantly in which direction. 50 yards north. 24 feet east. 20 more steps uphill. Every time pausing and hearing nothing but the dark silence. Finally we reached a point where the two pictures looked identical with a minimal difference to CT and we just started to ring the lost phone. Carefully listening to the sound of darkness, looking at 360 degrees and then , wait, is that… THERE, LIGHT!!! I rushed towards it, and yes it was, MY PHONE!!! IT WORKED!!!

As I rescued my dear phone from the bitter ice, it greeted me in character –the pink home screen boxes nonchalantly indicating I missed only 19 calls and 123 messages, I realized there were multiple factors that made this possible such as having a bunch of geeky friends full of ideas (who work for Microsoft), the lost phone not running out of battery or not getting crushed by other skiers on the slope and mother nature didn’t let it rain during the full 3 hours phone was resting on the snow ground. And that it landed right side up!

I think this is a proud and successful story of Windows Phone 7 which has helped me rediscover my vision of technology and how it can make a difference in your day to day life.  So Thank You WP7 !! 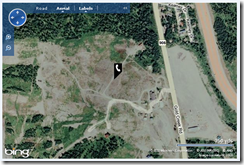