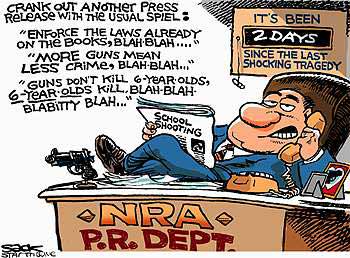 The artist’s familiarity with the facts is, at best, tenuous.

First off all of the NRA-ILA P.R. people I have dealt with have been beautiful young women, not overweight men. Second, those people just as horrified as anyone else about the tragic deaths of innocent people. And third, nearly all mass shooting happen in “gun free” areas with attempted mass shootings being stopped in the areas where people were allowed to defend themselves.

If the NRA had it’s way there would be far fewer “gun free” areas and far fewer mass shootings.