While at the NRA Annual Meeting on Saturday I wore this shirt: 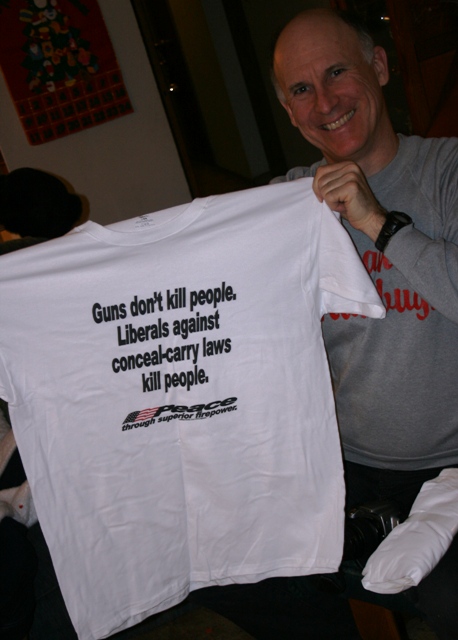 It got a lot of compliments while on the exhibit floor but something happened that night while at the blogger dinner. I’ve been told that I might have to burn that shirt. I would have never worn that shirt to work and figured as long as I stayed away for places like that I would be okay. But censors are sometimes where you least expect them. Yes, the heavy hand of censorship is threatening me because of that shirt.

On the night in question there were about 20 or 30 bloggers at this bar having dinner, drinking a few, and trying to talk to each other (it was very loud). Alan Gura had expressed, rather forcefully, that it was too loud and wanted to go someplace else so we could talk easier. I was up moving around and trying to shepherd people in the general direction of the door and to a nearby outdoor plaza with a quiet fountain and seating. From a nearby table filled with college students two young women approached me and said they really liked my shirt and they wanted a picture of one of them with me and the shirt. I obliged them.

I later told Say Uncle about it and he quipped, “I’ll bet you never thought you could use that shirt to pick up chicks, did you?” I laughed and said, “No.” That would have been the end of it had I not opened my big mouth later. Later that evening as I was talking to wife Barbara and she asked how my day had gone I told her of the event and Say Uncle’s joke. In the silence that followed I blissfully babbled on and told her of another funny thing that happened. This probably sealed the fate of that shirt.

As everyone was saying goodnight someone said how wonderful it was to meet and hang out with the celebrities like Michael Bane, Alan Gottlieb, and god of gods Alan Gura. I agreed and added something like, and pointing at Mike W, “But you said I was a celebrity.” Mike protested, “But you are a celebrity. You are the Boomershoot guy!” Dixie was standing just to the right of me and said, “You are the Boomershoot guy?” and stretched her arms out with fingers straight, palms flat, and bowed to me.

Barb hasn’t actually said it in words but I’m pretty good at reading the silence.

I think I’m going to have to burn the shirt.