It’s rare that the government gives guns to civilians so they can defend themselves. But it’s apparently happening in Thailand:

At the local Buddhist temple at Trohgen village in Pattani province a class is being held for a group of mostly female community volunteers – but this is no religious ceremony.

“So many of my relatives have been shot and killed I feel bitter inside. I want to know how to shoot, so I can help people in the village.” 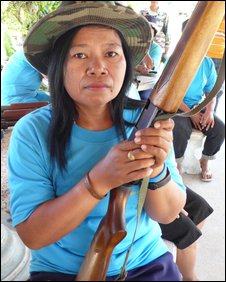 One human rights group says up to a hundred thousand civilian Buddhists and Muslims have been given guns to “protect” themselves in the three southern provinces of Thailand, but this is a figure the military denies.

This is a BBC report and it’s not surprising they put the word ‘protect’ in quotes. Would they do the same if they were talking about the police being given guns?

H/T to Ben K. for the link. Ben worked in Thailand for a while.

2 thoughts on “The government is arming civilians”