I took two people to the range with me tonight.

Gang is one of my co-workers. He is from the People’s Republic of China. He had some military training when he was still living there but he only fired eight rounds total from an SKS. He went shooting with some friends in the U.S. once quite a while back. He doesn’t qualify as a “new shooter” but he is still a beginner. He told me he would like to try it again sometime and I, of course, was pleased to take him to the local range. He said his father-in-law was visiting from China and would like to go along too if that was okay with me. FIL had never fired a gun before. He had field-stripped one in training but had never fired it.

Gang bought me dinner at a local Chinese restaurant. I went through the safety rules with Gang translating for his FIL. I told him which guns I had brought and Gang asked if they all fit in the car. I said there was plenty of room but I was carrying one with me there in the restaurant. They didn’t seem surprised or concerned.

When we got to the range I then had them do some dry firing with the .22 revolver. I worked with them on the grip, stance, sight alignment, and trigger control. First using the gun in single action, then double action.

Here is FIL cocking the gun in preparation to fire his first actual shot: 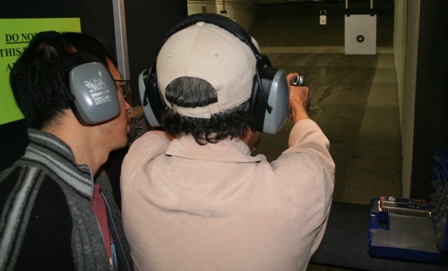 Here is the result of his first eight rounds from about 10 feet away: 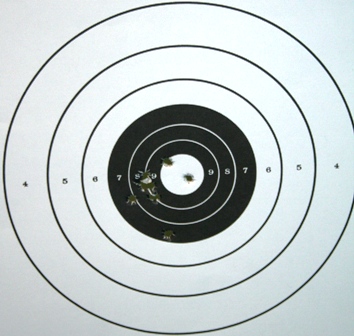 I was impressed! I know people who have put many hundreds of rounds down range and can’t shoot that well. Gang’s efforts were similar but offset to the right and up of the bullseye about the same amount as FILs were down and to the left.

I then rented a Ruger Mark III/45 since my Ruger Mark II is still with daughter Kim in Idaho. Here FIL is punching holes in the target with the semi-auto: 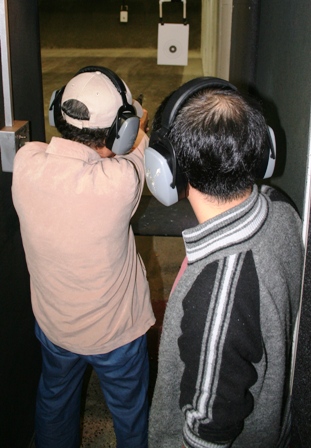 I fired a few rounds with my STI to make sure it didn’t go full-auto on me after getting it’s new NP3 finish before letting them try it.

They both fired it a few times then I loaded up the Gun Blog 45 for them. The loads were 230 grain bullets but downloaded to a Power Factor of only 175 (typical is about 200). Here the FIL is just getting the gun out of recoil with the slide still not closed:

They said the .45 hurt their hands a little bit but they had big smiles on their faces after shooting a few rounds each: 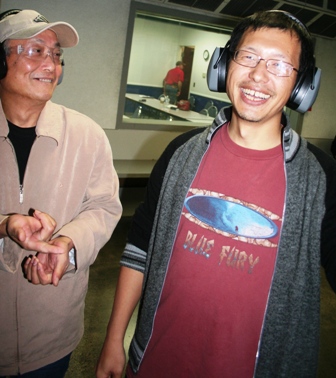 Next came the Evil Black Rifle:

Success! The target below has holes from both FIL and Gang from about 20 feet away. Each of them had one go low and the rest in a tight group in the middle of the A-Zone. FIL put his three on the lower left of the A-Zone with Gang having the upper three.

As I watched them shoot I keep thinking of Tiananmen Square and wondered how things might have been different had the civilians been armed and able to defend themselves. Gang, his wife, (and perhaps FIL), and daughter will be attending a private Boomershoot party next spring. After learning how to use guns of course they need to learn how to make explosives.

I’ve now taken new shooters to the range from Taiwan, India, Canada, and the People’s Republic of China. I’m exposing the world to freedom, first hand, one person at at time…

As we were leaving the range Gang asked if I was going to the gun show this weekend. I told him that I was returning to Idaho but he and his entire family (even the baby) would be welcome and he said he might go to look around. He doesn’t have a house right now but when he does he might buy a gun for self-defense then.