I frequently get comments from envious guys who when finding out I’m married to a physical therapist say something about “the massages”. I just smile and let them believe what they want to believe. More about those “massages” later.

I don’t believe I’ve posted about this before but when I had lunch with her last Saturday at her office I saw a sign on the wall above her desk. It brought the whole issue into sharp focus.

The Ten “NEVERS” in Physical Therapy

For most people that is just a hint. You don’t really understand what it means until you have been married to one for a few years. Here is another hint; when asked what the P.T. stands for on their badges they frequently give one of two answers:

Now we go into the specifics of being married to one.

If you think of “massage” when you think of a physical therapist then you obviously don’t know what friction massage (also called Cross Friction Massage-CFM) is. The previous link says:

Where most massage methods use some form of skin lubrication, CFM uses none so that the finger (usually one, but sometimes two) doing the massage is not sliding across the skin, but rather is taking the skin with it, allowing for the force to be transmitted directly to the deep tissue being treated. The motion is small, maybe an inch or so, back and forth “across the grain” of the tissue, so you have to have some idea which direction the structure normally runs. The amount of pressure should be moderate, which will often cause some amount of discomfort, but this should never be too painful.

“Too painful” is a technical term which means the patient’s adrenaline reaches a level such they can break out of the restraints. Furthermore what they do is push you right up to the edge of “too painful” and hold you at a plateau until the area starts to goes numb. They keep asking if it has gone numb yet and as it starts feeling a little bit better they press harder to keep the pain at the same level. They claim this is just to “treat the deeper tissue”. The veracity of this claim depends upon what your definition of “treatment” is. All observable data indicates that “treatment” consists of destroying your pain receptors through over stimulation.

You might ask how I know all this. Good question. It turns out that in order to keep her Pain and Torture license up to date your local friendly Physical Terrorist has to take classes on a regular basis. Guess who she experiments on before she starts charging money for practicing her evil trade. It’s me. In the early years of our marriage she would come home from a class and coyly ask something like, “Didn’t you say your shoulder was a little sore last week?” I would answer truthful — and regret it. Since then I learned the wisdom of Oscar Wilde when he said, “The one charm of marriage is that it makes a life of deception a necessity.”

A contest with a thinking being is never over and a little white lie about all my body parts being in perfect working order was only a minor speed bump to someone who has made their career P/T. One time when she came home from class she had a little box with wires coming out of it she wanted to experiment with me as the subject. I have a couple degrees in electrical engineering and I know what can be done with a box with wires coming out of it. I also hate electricity going through my body. I mean just a little bit of it which most people think of as “I can barely feel it” makes me very irritated. If someone else were to describe the sensation as “a little tingle” it will infuriate me. I asked if the box had batteries or plugged into the wall outlet. She informed me that it had “little batteries”. Apparently she didn’t realize the only word I needed to hear was “battery” and “little” was superfluous unless she was talking “little” on a microscopic scale. I mean, I could make a device that would kill a horse with a watch battery if I wanted to and her trying to downplay the part about electricity being involved was only increasing my suspicion.

When her telling me how much it didn’t hurt when it was used on her, and how it felt “kind of strange” only caused my teeth to grind she broke out the sad eyes and looked like she was about to cry. I softened a little bit and she said she would put it at the lowest level and slowly increase the intensity and as soon as I wanted to stop she would immediately stop. I said I wanted to stop now, but she brought back the sad eyes and I let her attach the electrodes to my leg.

She slowly turned the knob clockwise repeatedly asking, “Can you feel it yet?” “I don’t want to hurt you, let me know if it hurts.” I told her I didn’t feel a thing and she continued to turn the knob. Her face grew more and more puzzled and I started to smirk. Her little box was broken and I was going to get away with not being shocked! She finally stopped and announced that the intensity was at the maximum setting and that I “should feel something.” I assured her that I didn’t and repressed my satisfaction as best I could. She looked her little box all over and said, “Oh! I see!” and before I could twitch a muscle she turned the switch she found from “Off” to “On” and muscle twitches were generated without any conscious effort on my part. I levitated off the bed and roared in anger. Before I came back down I had torn the wires off my leg and when I landed was facing her like a lion in a crouch and ready to pounce. She instantly brought back the sad eyes, froze absolutely still, and mouthed the words, “I’m sorry.” This saved our marriage but not from her from being very vocally reminded that I do NOT like electricity going through my body.

Another time she came back from a class and told me she had learned how to test for “bone spurs“. She explained that you pushed with your thumb in various places and watch for a “chandelier sign”. I politely asked about bone spurs and she explained they usually go unnoticed until the person gets up years a ways. At my age, then in my mid twenties, I might have some but wouldn’t notice them at all. Even with testing she probably wouldn’t be able to find them. But she wanted to practice the tests anyway.

I should have paid more attention during the part about what a positive test result indicator was rather than the part about “probably wouldn’t be able to find them”. I took off my shoes and socks and she started pressing her thumb into the flesh around my heel. She pressed harder and harder and I could hear her grunting with the effort required to probe deep into the tissue of my feet which were nearly armored with strong muscles from playing tennis almost every day. It felt kind of nice. Basically I was getting my feet massaged which I considered a real treat. It was what I had expected when before we got married she said she wanted to become a physical therapist. I was relaxing and enjoying it and I could tell she was getting a little frustrated (see rule 8 above). I was sympathetic and asked, “What is it you are trying to get to happen again?” Between grunts she growled out, “A chandelier sign”. I started to ask what that was when she said, “Maybe it’s over here” and she pressed deep into my flesh. We didn’t have a chandelier in our bedroom and hence I returned to floor level after bouncing off the ceiling. I do remember looking down at Barb still in position as if my foot was still cradled in her hands with her thumb mashing as hard as she could on that hidden button in my foot which should have been labeled, “DANGER! DO NOT PRESS UPON THE PAIN OF DEATH”. She had a big smile on her face and after I stopped bouncing I demanded to know why she was so happy. Her glee was totally oblivious to my state of mind and she told me, “Because I found it! I couldn’t find it in class but I found it with you! That was the chandelier sign. It was just like they said it would be.” Her moments of happiness are somewhat rare with me around and since I had not warned her I did not like chandelier sign I didn’t do anything but glare at her and resolved to listen more carefully and think things through in the future.

Surely, you might ask, there are some “benefits” (nudge, nudge) to being married to a physical therapist. My response to that is, “Do you know why physical therapists make such poor lovers? It’s because they use ice to take the swelling down.”

Lest you think my life is miserable or even uncomfortable I need to point out that I’m not only married to the physical therapist named Barbara, I’m also married to Barbara the woman. I’m not going to go into all the details but the card below is a hint. I get cards of a similar nature for my birthday, Valentine’s Day, and our anniversary (click to see the inside): 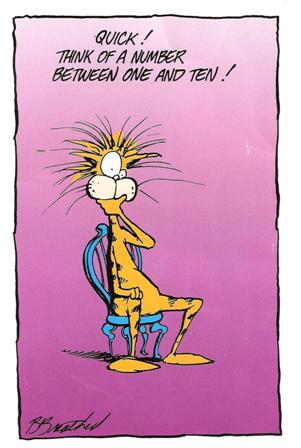 Barb explained, “It really should say, ‘You win’, rather than ‘You lose'”. But it’s close enough. I’ve been with her for 34 years now and most of the time I know how to read between the lines with her.

5 thoughts on “Being married to a physical therapist”