Last evening as I was leaving work I saw this. Sorry for the low picture quality. It was taken with my cell phone. 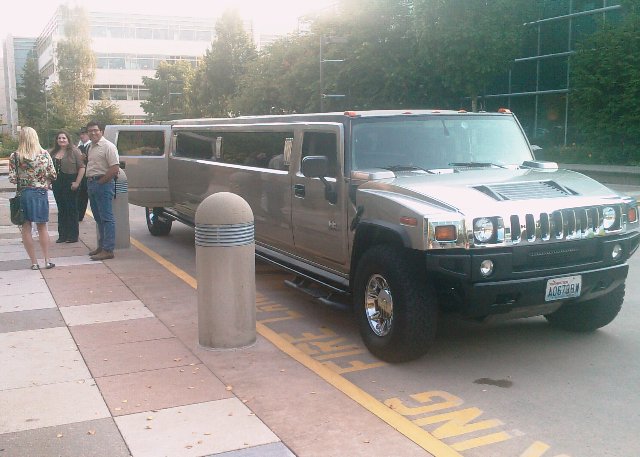 Today, all day, was the company meeting. In a lot of ways, especially when Steve Ballmer is on stage (or running through the crowd), it’s like a prep rally from high school. The following are my Twitter comments while watching the meeting. If you view them on the web they don’t have the proper time stamp because the cell phone connectivity (and my Internet connection on my Pocket PC) at Safeco Field was very intermittent (overloaded with all the geeks with mobile devices). Most of the Twitter updates had to be sent several times before they finally made it out.

At the company meeting. Live Mesh is awesome. Office 14 is gettting lots of applause too.

Just saw world premier of more MS ads. Will show up on TV tonight. Much better than the first one.

Raiin Wison led us in making a new world record of simultaneous paper airplanes in the air–22K.

One of the best ways to predict the future is to invent the future.–Craig Mundie

The robotics demo was impresssive. Receptionist assistant will go to beta in a few months.

60B in sales. 22B in gross income. No other company (if they aren’t an oil company) can say that.

Google has never been challenged. I want see what happens when they are.–Steve B.