If you listened to the Gun Nuts on August 19 you would have heard me wonder how Jarrett was going to handle the wide range of shooting ability in the participants when we showed up on August 22. I believe I had the most training going in. A partial list of my firearms training:

Most of the others had not had any formal training. Other students who have taken courses from multiple schools have wisely told me that when attending a new class you should approach the class with an open mind and if you can take just one good thing away then the class was worthwhile.

Jarrett did a great job of dealing with the disparity. He obviously had to get everyone up to speed with the fundamentals such as grip, trigger control, and sight alignment. He did this on the first day mostly in the classroom. On the second day he did something everyone was impressed with. He made marks on our hands that helped us get the grip right: 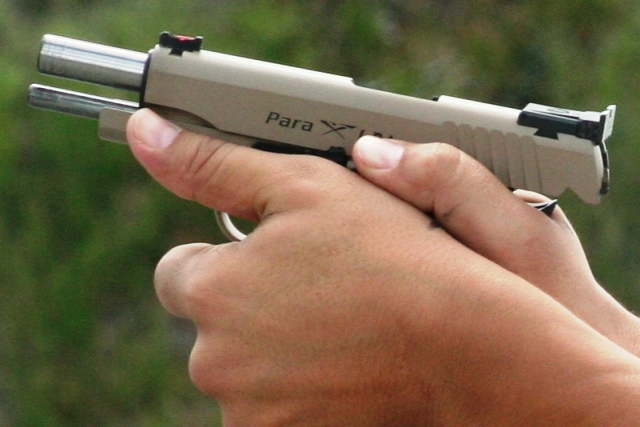 Notice the mark on Robb’s right thumb just below the joint? There is a matching mark on his left hand. These two marks line up when he was holding the gun properly. It’s difficult to see but there is also a mark on his right hand directly behind the beaver tail safety underneath the slide. This mark should be directly in line with the long axis of the gun and the axis of the shooters arm.

When I saw what Jarrett was doing with these marks little shivers went through me. This was a brilliant teaching aid. I was the next to the last person to get the marks and he told me I was the only person to already have the proper grip. John D. to my left and the last person also got it right. I had made a very slight modification to my normal grip when I showed it to him. I had to shift my right hand just a little to get the proper alignment. The single stack gun is much narrower than what I am used to and once I got the marks on my hands I began practicing my draw making sure that the lines matched up even when I was drawing at full speed.

The draw was one of the areas where Jarrett cut some corners on the training. He talked about it some but didn’t have us do any drills specifically working on the draw. He focused on doing a safe draw but not much on speed. This probably was a wise thing considering the other things that were going to be a lot more fun and new to the more advance shooters but in terms of self-defense shooting this probably was more important.

We shot at 8″ plate racks from about 15′ as we were pushed to shoot faster and faster. This was very frustrating for me because my plates would go down hard enough they would bounce back up. Some plates I put down three times only to have them remain standing.

We did some 25 yard slow fire shooting to verify our trigger control and zeros. On an silhouette target my gun was giving me head shots when I aimed at the chest. Jarrett verified it did the same for him and adjusted the sights for me.

Our range had the capability to give us moving targets: 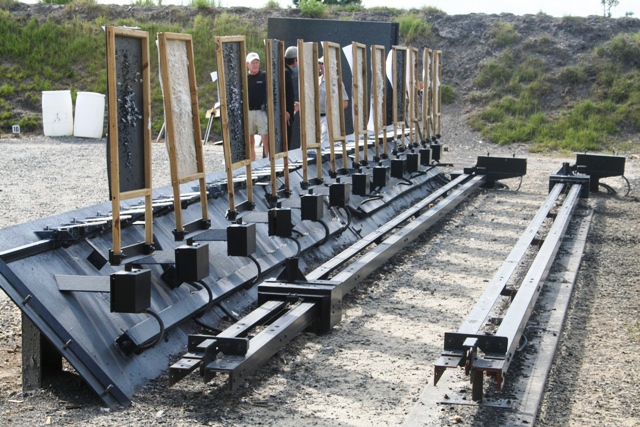 Looking carefully on the left you can see the remotely reset steel plates then the turning targets. The two rails on the right are for targets that, from the shooters perspective move horizontally left and right. All of these were utilized.

This was nearly all new to me. In competition I have shot at moving targets and moved while shooting but I have had near zero formal training on it.

We shot at the turners. We were given two seconds to empty our eight round magazines into silhouette targets.

We shot over, around and through barricades: 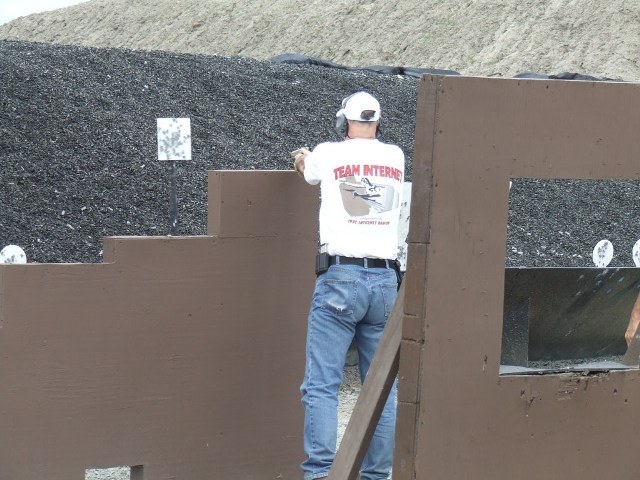 Me, shooting at a steel plates over a barricade. Photo by JR.
Yes, I was taking advantage of my height when everyone else had to use two different shooting positions to get access to the same targets. 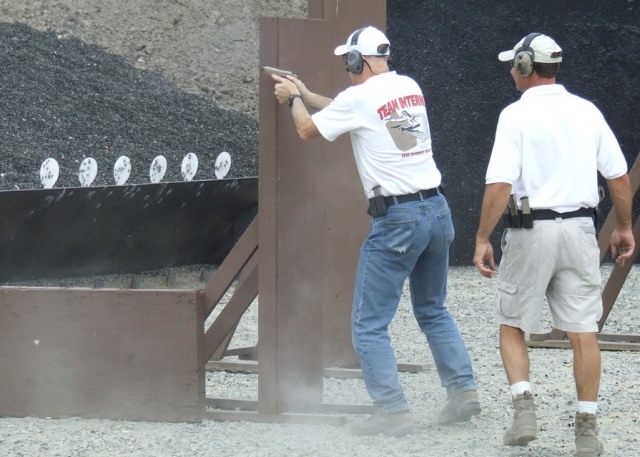 Me, supervised by Todd Jarrett, shooting around a barricade. Photo by JR.

We shot on the move. We advanced on the targets while shooting (photo by JR):

We shot at horizontally moving plates while standing still. We shot at plate racks while we were moving horizontal.

We shot at horizontally moving plates while we were moving both left to right and right to left.

The things I took away from this was: 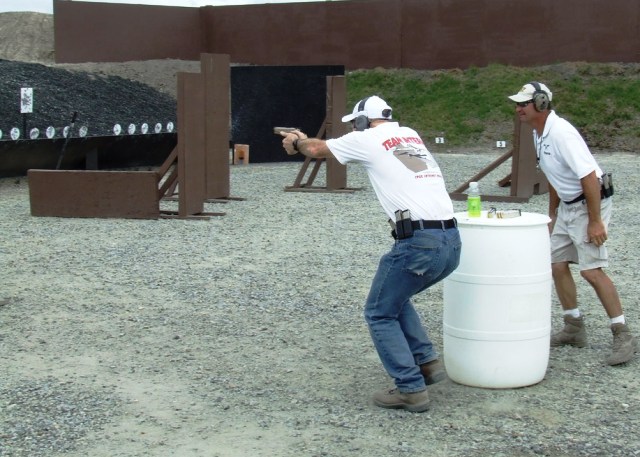 Me, supervised by Todd Jarrett, shooting at a steel plate while advancing. Photo by JR.

See also this video from Sebastian:

We did some rapid fire from the hip shooting at a steel plate about 18″x24″ in size from just a few feet away from us. The point was to be able to get the gun on target in a close quarters situation. Below you can see Tamara, having just completed the drill, getting a little further instruction from Jarrett on the topic: 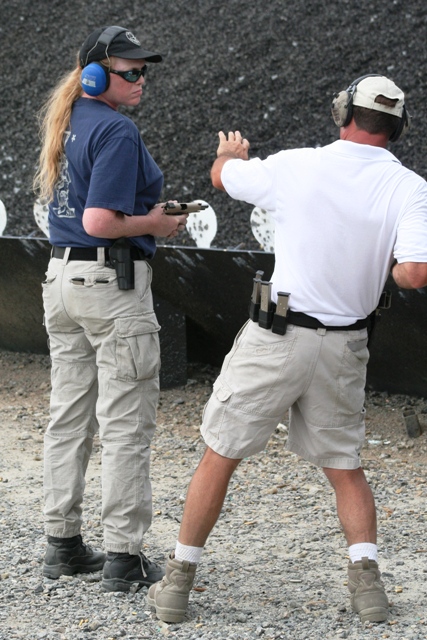 We then did some plate shooting from 35 yards. Here is Kevin hammering the plates (and having them bounce back up) at distance. 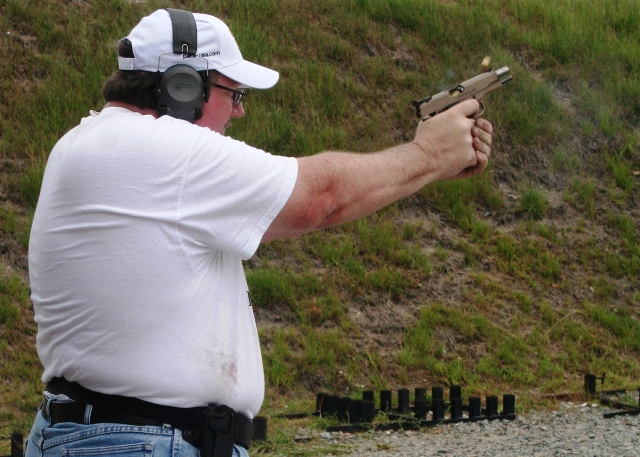 One thing that I found as a glaring omission was learning to reload quickly. It was appropriate given the time constraints and disparate training of the students but I was hoping for some “fine tuning” of my reloads.

My biggest surprise was how useful laser sights are for training. I’m not convinced they are particular useful for the shooter as he or she is actually shooting but as an instructor or by video taping as the student is shooting a lot can be learned and taught. I was previously of the opinion the most useful aspect of them was as a toy for dogs and cats. One small example is to have the student shoot rapidly and watch the path of the laser on the target. It should track nearly straight up and down without overshooting the point of aim. Similar lessons can be learned and taught in transitioning from one target to another.

The most fun was the shoot house. I already have a full post on that and won’t go into that again except to say that I disagree with Kevin with what was happening while we were taking turns going through. Kevin is of the opinion ninjas from Gunsite Ranch were spying on us. I think this was actually a vulture from the Brady Campaign hoping for some blood to be spilled: 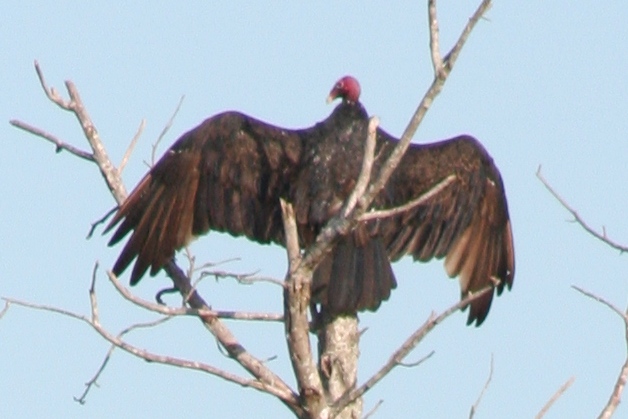 
8 thoughts on “Training with Todd Jarrett”