Daughter Kim and I took off shortly after 8:00 this morning to do some work at the Boomershoot site. It’s about 45 miles from home but because of the narrow twisting roads down a steep valley and back up the other side it takes a full hour to get there unless you are willing to make the tires squeal on the turns. It’s not hard to do but there is not much point in pushing in to save 10 or 15 minutes while risking rear ending a slow-moving piece of farm equipment as you come out of the turn. The drive gave Kim and I a chance to talk a bunch.

The weather was clouding and cool. Amazingly cool–I don’t think it got above 65 all day long. And with the breeze it was actually a little uncomfortable at times.

Driving the little Aveo all the way to the Taj Mahal required going through some rather tall Reeds Canary grass: 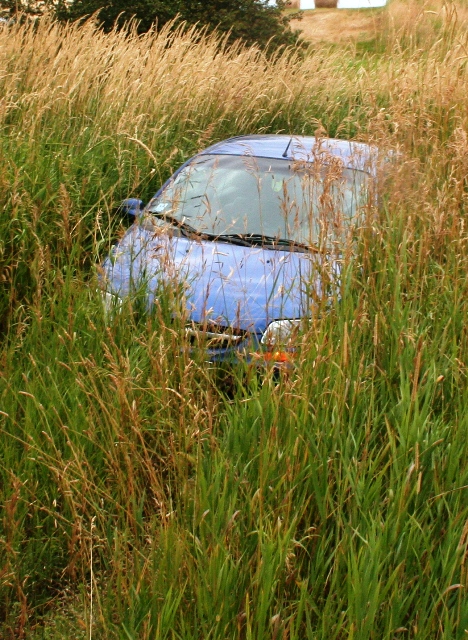 We arrived on site and did some electrical measurements on the batteries and solar cell charging system. Everything appears to be working correctly but the batteries still aren’t fully charged. We fired up the generator to charge the batteries faster. It started charging at 6 amps at about 9:30 and when turned off about 13:00 it was down to just over 4 amps. So I think we are getting closer to a full charge. Maybe the next time we go out the solar cells will have the batteries topped off.

The water system appears to not be leaking or if it is it must be a very slow leak. I put about seven gallons of water in it a couple of weeks ago and verified everything was working correctly. I was able to get a couple of gallons out on this visit without it going dry so I’m not sure why it went dry in June unless the drain tile didn’t fill it up this spring like I thought it would have.

I fixed up the steps from the pump to the target building area some. They should be fine for this summer but I suspect they will get loose again when the ground gets wet again this fall.

The big tarp in back of the shed we use to cover up the extra surveyors stacks and empty containers has a large rip in it. It was getting old and I’m not too surprised. I’ll have to replace it before winter. Another thing we really need to do is put in some more decorative blocks to the south side of the target building area. This is where we stacked the empty crates while building targets this year. It got a lot of foot traffic and there needs to be something there to keep us out of the mud when it rains and snows.

We went to my parents house and gave Dad his birthday present. He will be 85 in a few days. He had a knee surgery last week and is doing well. 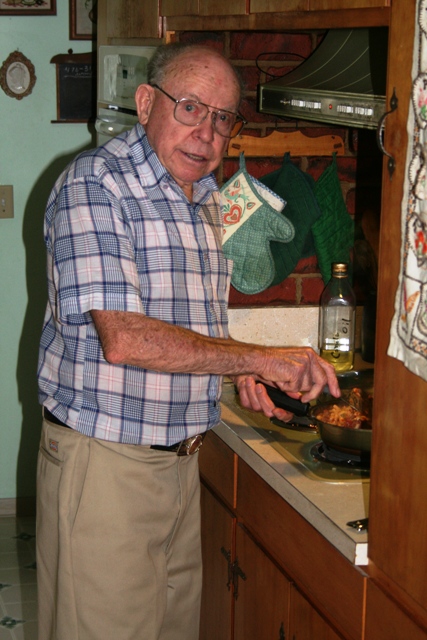 After visiting for a while with Mom, Dad, their friends Walt and Jan, and my sister-in-law Julie. Kim and I then went for a walk. We inspected the Austrian Winter peas in the back of the truck. This was the first time they have raised them in many years. 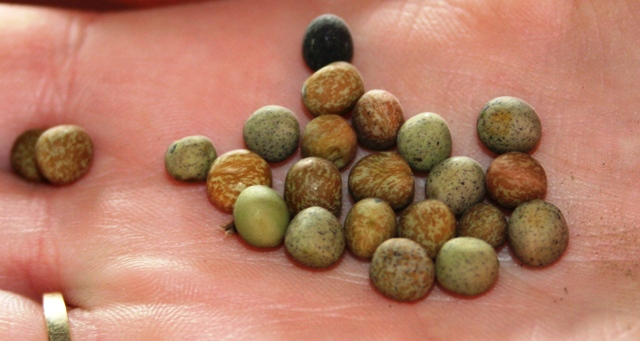 Kim had never seen them before. I told her we could eat them raw but to be careful. It would be like putting rocks in your mouth until they soaked up enough water to soften up a bit. She agreed with me. It is a lot like pebbles in your mouth. She didn’t like the taste of the skins but the insides are good.

Below are a couple pictures of the peas in the field. A month ago, before they fell down (a natural and expected occurrence), the pea vines stood almost as tall as Kim and when stretched to their full height were over six feet long in places. 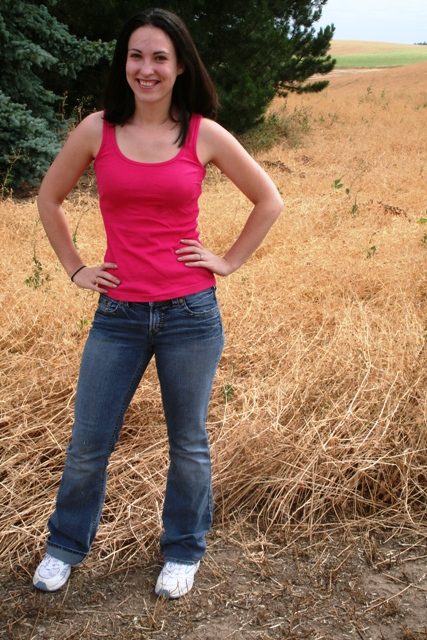 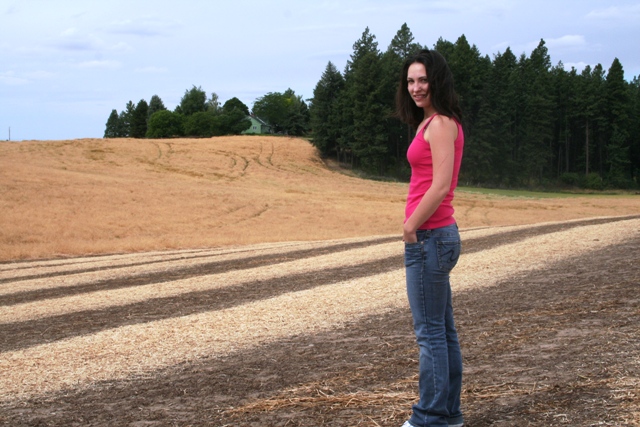 In the foreground of the picture above is the field after it has been harvested. In the background are unharvested peas and my parents house almost hidden in the trees.

I told Kim the story of how when I was about 10 years old I accidentally started a fire that sweep through that exact spot where she is standing and I was certain it was going to catch the woods on fire. But Dad was within shouting distance, working on the house, and was able to get the bulldozer started and dig a fire break in the wheat stubble before it made it to the trees. My Great Uncle Walt and I put out the little fires that made it across the torn up dirt and the woods were saved. 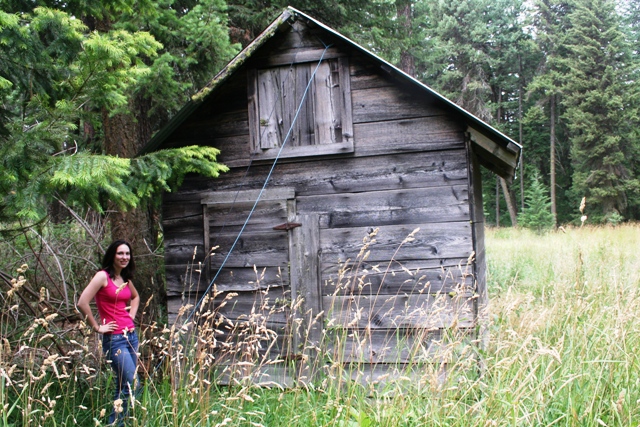 This is “The Old Well House”. It’s not used any more. But there were lots of stories to tell here. “The Little Pond” was just 50 yards from here and Dad was concerned us kids would drown in it and dug a hole in one of the banks to lower the water level so the pond was shallow enough we could have touched bottom with our heads above the water had we been foolish enough to get in with the frogs, dragon flies, and thick pond scum. I did fall into the little creek that runs right past here when I was probably only seven or eight years old. It was the middle of the winter with probably a foot of snow on the ground the creek literally ice cold with a partial covering of ice. It wasn’t deep and I was able to wade out. But I was completely soaked in the ice water and more than a little scared. Just a few feet away from where I took this picture is an apple tree that used to have the largest apples I have ever seen. The apples would get so large they would break the stems and fall off before they would get ripe. The were still sour and weren’t really edible when raw. But just one apple sliced up, fried, with lots of sugar on it, would be enough for our “vegetable” at dinner for our entire family of five.

We had lunch with my parents, brother Gary, Walt, and Jan. Then we said good-bye and went back to the Taj Mahal to turn off the generator and lock things up. As we left I took some pictures of Kim on a hay bale in the field where we hold the Boomershoot: 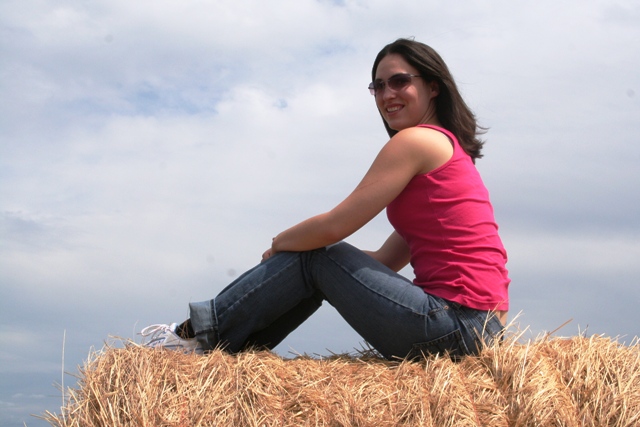 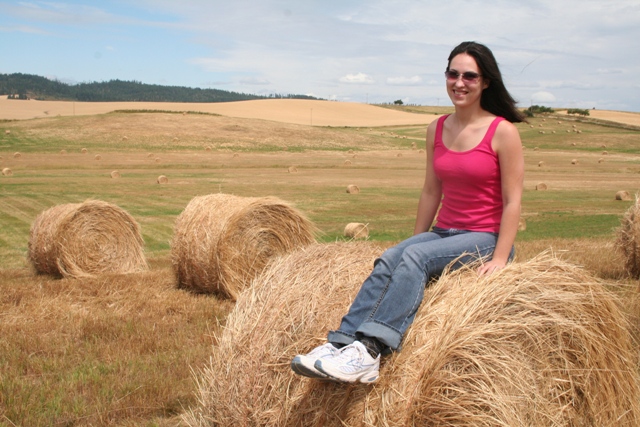 As I was taking these pictures I figured she should be called “The Boomershoot Babe”. She has made most of the explosives for the targets for the last three years. She had help from her husband Caleb and others but she has done the majority of the actual weighing and mixing of the chemicals. She has probably made, in five pound batches, in a Kitchen Aid mixer about 3000 pounds of explosives in the last three years.

Kim, my Boomershoot Babe. Who would have guessed from seeing our little Bridezilla when she was four years old? Okay, so maybe you wouldn’t have been surprised.

7 thoughts on “A day with The Boomershoot Babe”