At the press conference they reported the dispatch center was messed up pretty good. There is broken glass everywhere, bullet holes in the wall, and some equipment was broken, etc. They have an alternate dispatch center at the drivers license office at a shopping mall at the east end of town. They opened it up and are “back in business”.

It was at this Sheriff’s office that I got my Idaho concealed carry permit. I taught a NRA Personal Protection firearms class in a room at the north east end of the courthouse, just across the street from the high school.

The Moscow police officer that was killed came to investigate and was shot some place outside. The second officer shot was a Latah County Sheriff’s officer who was attempting to come to first police officer’s aid.

Just north of the court house is another white roofed building. This is the high school Xenia attends. The shooter entered the building just to the east of the high school which is the First Presbyterian Church and killed the caretaker.

Police attempted to negotiate with the shooter but to the best of my knowledge never got a response from him. The last shot heard was about 1:00 AM this morning. This was probably a self inflicted gunshot to the head.

When I arrived about 7:30 this morning the police were still taping off the area: 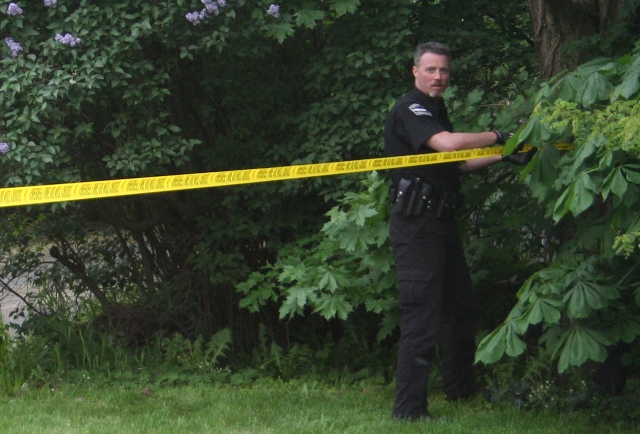 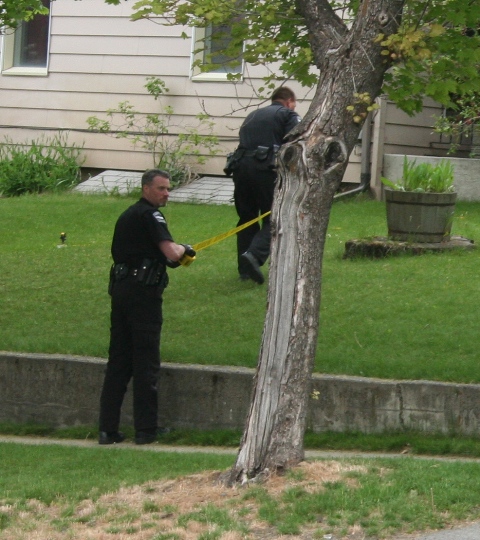 I walked their perimeter as did numerous news people: 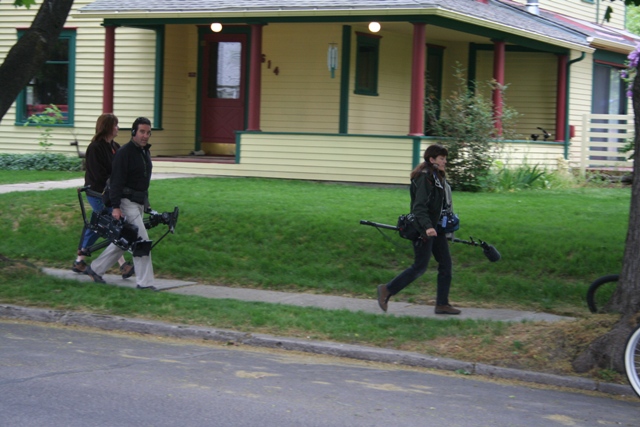 There were lots and lots of police present. Officers from Lewiston, Whitman County (just to the west from Washington State), and Washington State University Police officers came. Idaho State Patrol from Coeur d’Alene to Twin Falls (by airplane from hundreds of miles away) were there as well. The ISP will be doing the investigation since both city and county police officers were victims.

The Sheriff’s deputies below were well armed. AR-15’s or maybe M-16’s. I did not see any unloaded guns or unsafe gun handling. All appeared to have iron sights. 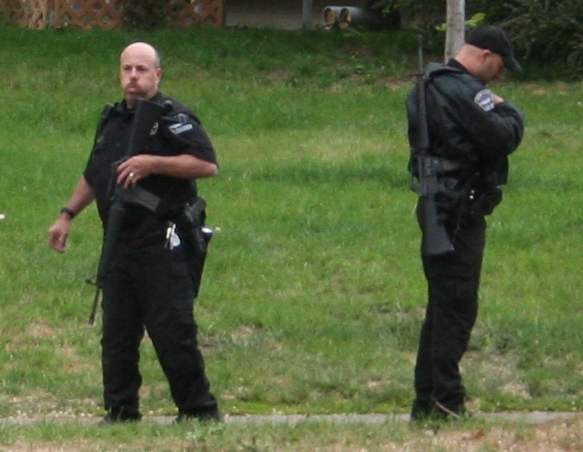 The picture above and the one below were taken facing north at the intersection of sixth and Adams at the south west corner of the Latah County Courthouse, Sheriff’s office, and jail. In the picture below you can see the radio tower for the dispatch center. One block further north is the Moscow High School. 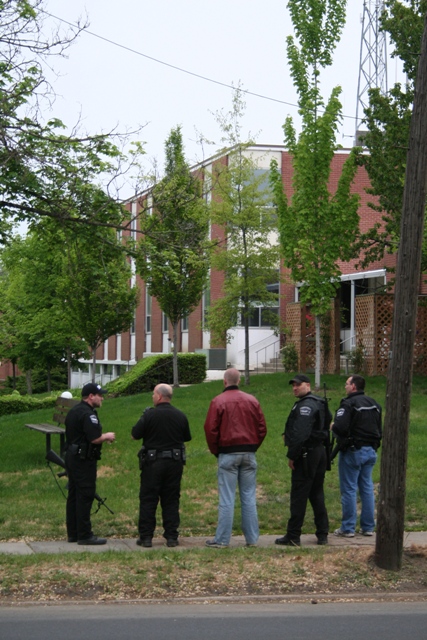 The 9:00 AM press conference was at the Moscow City Court House at 3rd and Washington. It was well populated with news crews: 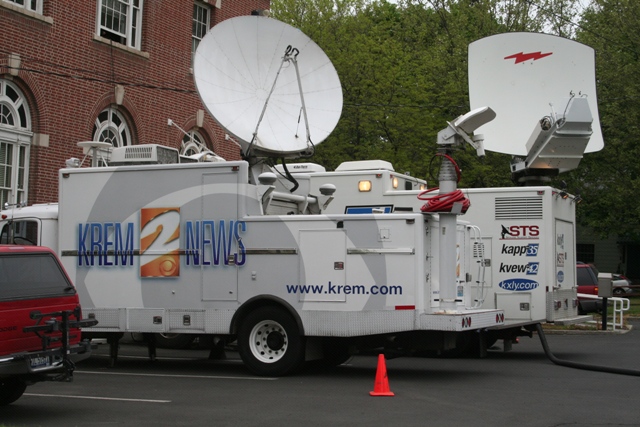 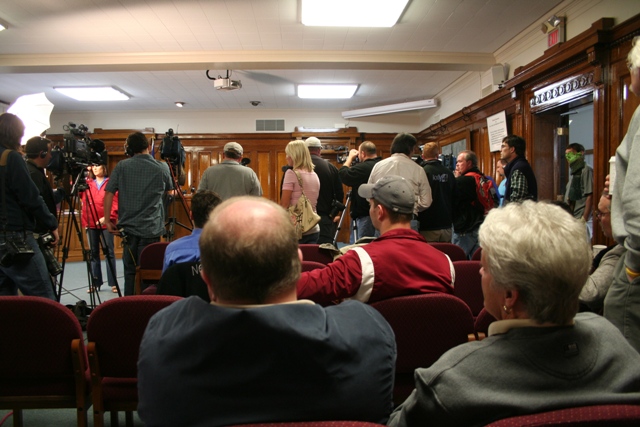 Xenia and I took lunch to Barb at the hospital. While waiting for her to meet us across the street at Therapy Central I took a picture of someone lowering the flag outside the hospital to half-mast: 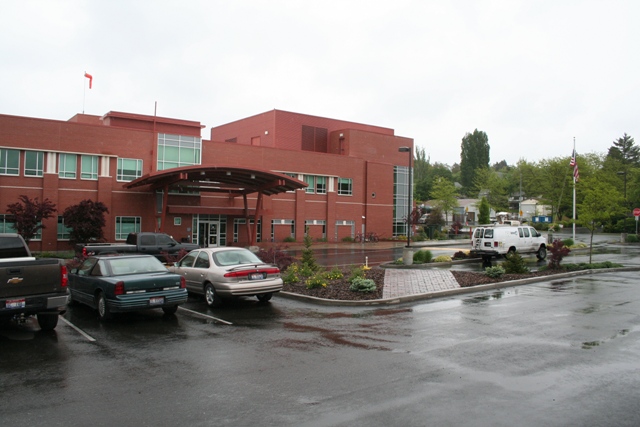 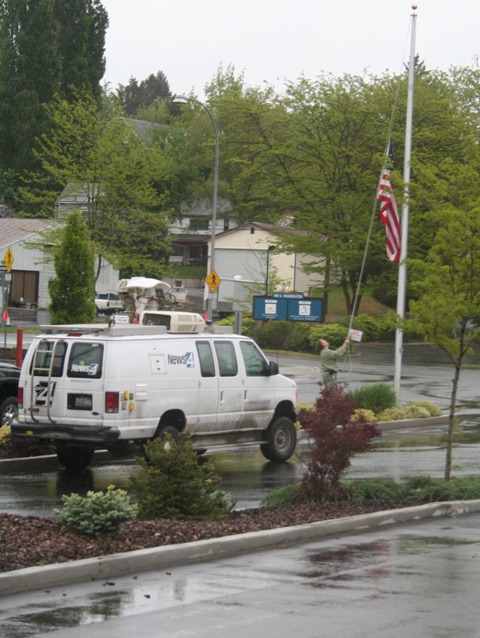 Update: Complete video of the press conference Xenia and I attended is here. It includes my question about the SKS rifle being an automatic.