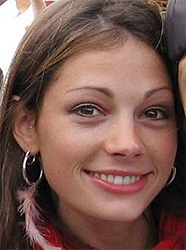 Lucy Braham was stabbed to death in her own home. Disarmed by her own government and unable to defend herself against an attacker armed with only a knife she died at the age of 25. The attacker had virtually nothing to fear entering her home. If someone enters almost any home in the U.S. and they will be hyper-alert for the sound of a 12-gage shotgun being racked and prepared for firing. Not in this home, not in this country.

How many more tragic deaths do the people in these countries need before they start asking Just One Question then demand their government stop infringing on their inalienable rights?