I’m not sure why, but this makes me a little sad:

AN era of aviation history has drawn to a close with the US-made F-14 Tomcat fighter plane – the one flown into the danger zone by Tom Cruise in the film Top Gun – being withdrawn from active service.

The Tomcat is going into mothballs because advances in military technology have made its greatest attribute – the ability to manoeuvre at high speeds and in close combat situations – redundant. 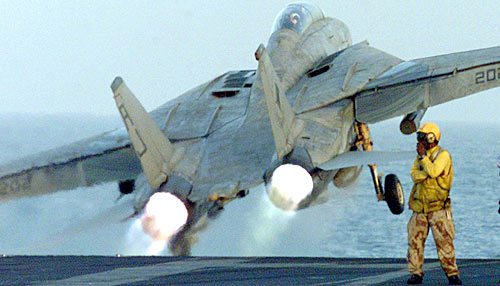 Fighter planes no longer need such abilities because they don’t dogfight any more. Instead, pilots shoot at each other with target-seeking rockets, sometimes from 20km away.

The Tomcats were officially retired from service last week, replaced by FA-18 Super Hornets that are cheaper to maintain, easier to operate from aircraft carriers and able to carry more bombs.

The F-14 requires nearly 50 maintenance hours for every flight hour compared to five to 10 hours maintenance for the FA-18.

The F-14 entered operational service in 1974 when two squadrons were assigned to the USS Enterprise, replacing F-4 Phantom fighters that were eventually phased out in 1986.

The Tomcat was designed in the Cold War era to be the world’s best fighter-interceptor. Its primary task was to defend aircraft carriers against cruise missile-armed Soviet aircraft.

I thought they were deployed to deliver a particularly heavy missile.  But I forget the exact details and don’t really keep up on this sort of thing.  I just marvel at the capabilities and the engineering.