The potassium chlorate was delivered this week.  I just need to order the boxes used as containers for the explosives and I will have all but the most trivial items needed for Boomershoot 2006 in stock.

Last Saturday I tested out a flour mill as a tool for getting all the lumps out of the potassium chlorate just prior to mixing it with the other ingredients.  It works but requires constant human attention.  Dad had an idea that I will try at the next opportunity.  In any case I think I can get rid of the blenders which are the biggest power drain and another drain on labor as when they are used they require constant attention as well.

The main reason for the Saturday excursion to Boomershoot country was to test target detonation with .223 at the greater ranges.  I made some new targets and shot at them from 630 yards with a .223. I made a number of errors and didn’t realize until after I got home that because of the cold (30F) and the exceptionally high air pressure (30.5″ of Hg) the target velocity was probably under 1200 fps. This velocity is below what I would have expected the targets to detonate and that in fact is exactly what happened. I had nearly a dozen solid hits without them detonating. I fired one round of CCI Stinger (high velocity .22LR) from about 15 yards away (probably about 1500 fps target velocity) and a target with three .223 holes detonated. I really want to test the .223 with a target velocity of 1400 to 1500 fps.

Below is the target array I made to make it easier to assure a hit on a target while not having all of them detonate at once causing the neighbors to have things fall off the walls.  I had something else in mind, Ry suggested this but figured I would need someone at the shooting line to help get things lined up. While driving home from the Seattle area I figured out a way I could line it up myself.  I keep telling him that between the two of us we have a complete brain.  Lots of ideas from one or the other of us will be half baked and the other turns it into something quite clever.

From the shooters viewpoint 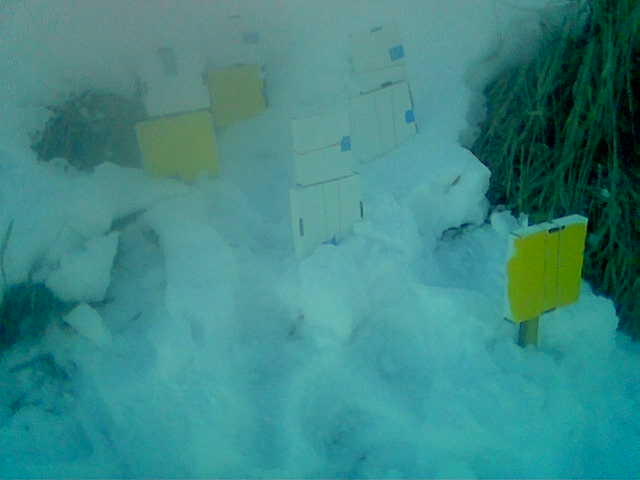