According to the UK Times Online:

Iraqis have reacted furiously to the three-year jail sentence imposed on Lynndie England, the US soldier pictured holding a naked Iraqi inmate on a leash at Abu Ghraib prison, provoking outrage across the world.

England, 22, was convicted on six counts of abuse while working as a prison guard, but was acquitted of a charge of conspiracy.

Last night she was jailed and dishonourably discharged from the US Army, but ordinary Iraqis said that it was not enough. They said the sentence exposed American hypocrisy, as it would have been more harsh had she been convicted of abusing Americans.

Iraqis were particularly incensed by the picture of England holding an inmate on a leash like a dog, a degrading act because Muslims regard dogs as unclean. In Iraq’s male-dominated society the idea of men being abused by a woman was said to be particularly humiliating. 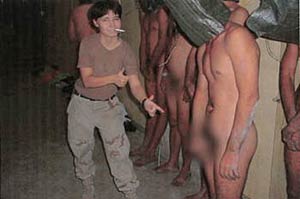 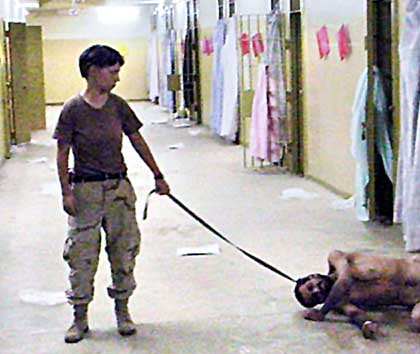 Where are all the “furious” Iraqis over all the beheadings, bombings, and the executions of politicians and teachers in Iraq?  Do they not exist?  Or do they just not exist in the reality of the UK Times?

England stepped over the line in terms of handling of prisoners and is going to jail.  But as crimes go there one has to keep in mind there are a lot of people that will pay to be treated like that.  Not so with the treatment our enemies are dishing out to innocent people all over the world.  I don’t approve of what England did but once she has paid her debt to society (three years seems more than adequate to me) I’m hoping she can become a productive member of society.  Perhaps she can utilize her fame and experience in the alternate entertainment industry.