Dinner was good. I really like this food vendor. This is the second year for them and will probably will continue to be the vendor of choice.

MTHead (frequent commenter here and sometimes quite quotable) showed up and helped with Saturday target production.

Our Saturday night dinner speaker Kim du Toit spoke on how he believes individuals can help Make America Great Again. He says there is a Boomershoot report to follow once he returns to Texas. Also, he has a plan to sponsor a free Boomershoot dinner for all participants. We will discuss the details and give his idea serious consideration.

The weather was mixed with showers on Saturday but Friday and Sunday was dry and a bit cool. The targets had a high detonation rate. We did not find any targets which failed to detonate when they received a solid hit. There were the usual targets which were torn and lost content when hit by projectiles of wood, rock and ammonium nitrate prills from other targets which detonated.

We had a last minute problem with the land owner on the hillside informing us the USDA Conservation Reserved Program had recently informed him the rules were being interpreted much more strictly than in the past. Hence we couldn’t put any targets on the grass. This limited the most distant targets to about 690 yards to 700 yards and about 30 feet in width. We put targets in this area out in two batches.

The muddy 375 yards berm was handled in a special manner as well. In previous years with extreme mud we found the blast from targets would completely coat remaining targets with mud which was near perfect camouflage. To prevent this we put targets in this area out in three batches. The targets were given greater spacing in depth as well as elevation. This was a huge help. There was virtually no mud coating of nearby targets.

The first two batches at the 375 yard line were the usual mix of small (4″x4″ and some 3”x3”) and a few 7”x7” targets. The last batch was a last minute idea of mine. Instead of putting the remaining 140 7”x7” targets out near 700 yards we put them at 375 yards. This made the end of the event easy, fast, and exciting. A Boomershoot Grand Finale! It seemed to be a great hit.

I had one shooter tell me, “I had my bench and everything packed up and then I saw there were a whole bunch of big targets at 375. That’s like a bank setting a bunch of cash out in the open for everyone. I had to unpack my gun and shoot from the ground. I got another 10 targets and one probable. 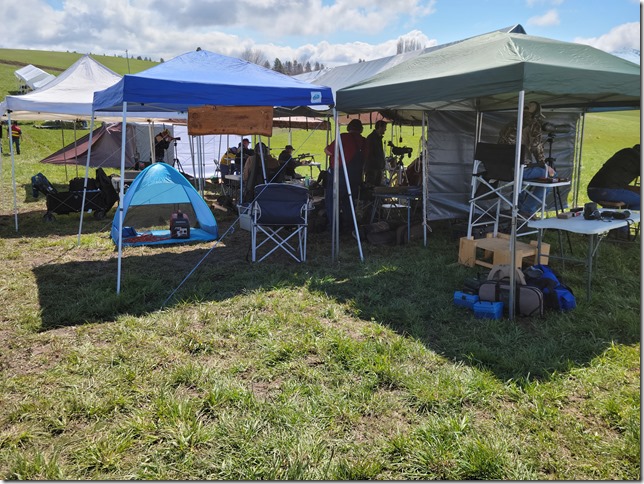 Some of the more elaborate setups. 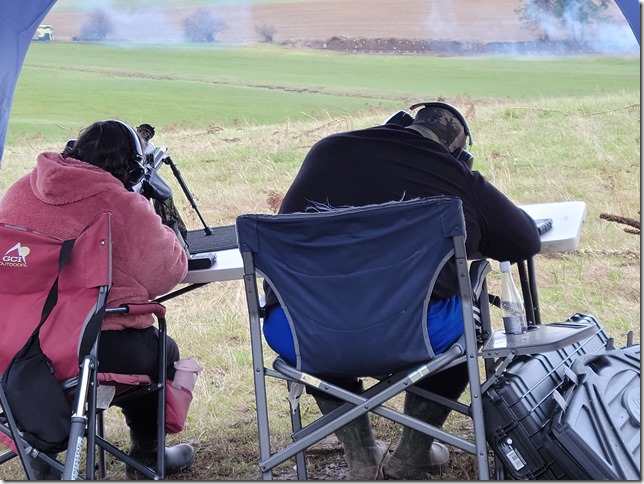 One of my co-workers and his wife with heads down.

The remainder of this post is high in image intensity and so I have split it to save people bandwidth.

The construction of the fireball was a little different from previous years but was successfully tested, at a small scale, the previous weekend: 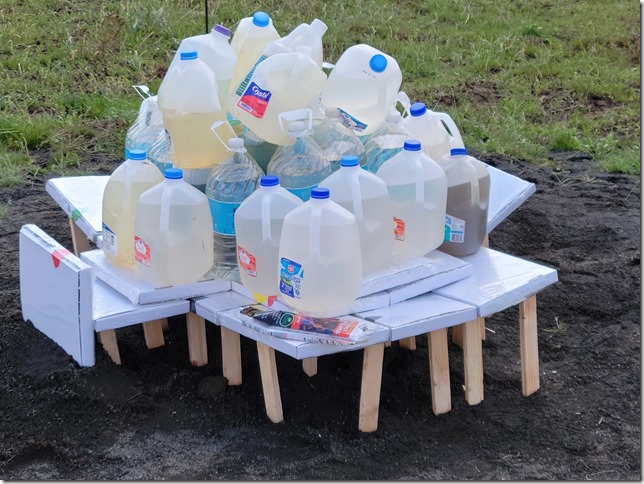 The fireball failed. Here are what I think are the critical frames from my video. Click on the image to see a higher resolution image. The first five are sequential frames and the last is several frames after. 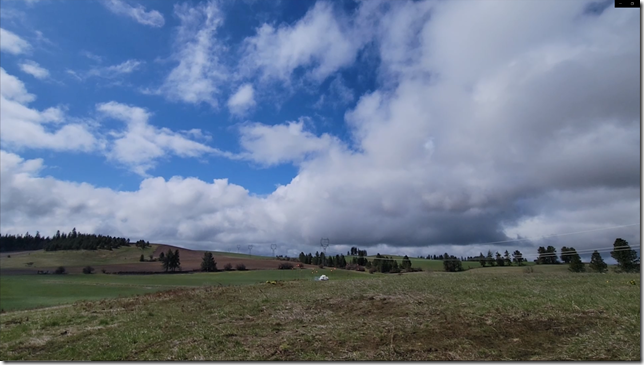 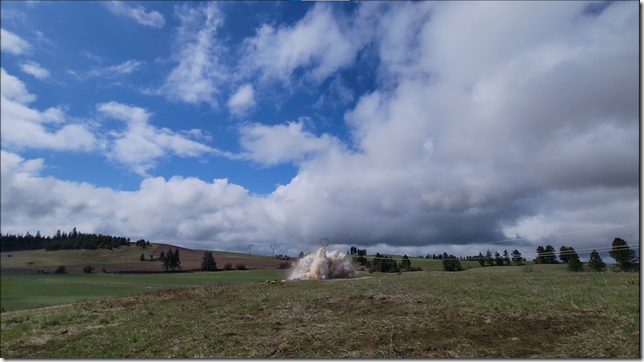 Detonation with shock visible on the ground. 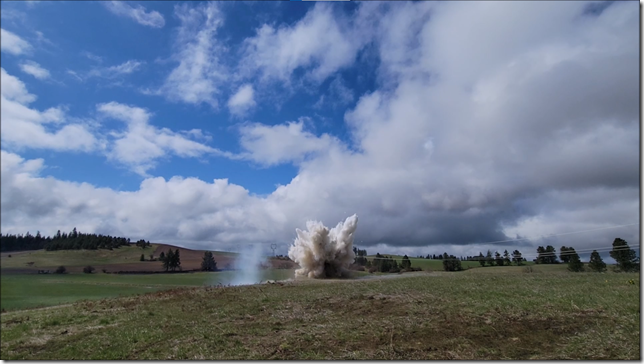 The shock wave has expanded to include the flares to the left and may have extinguished them. 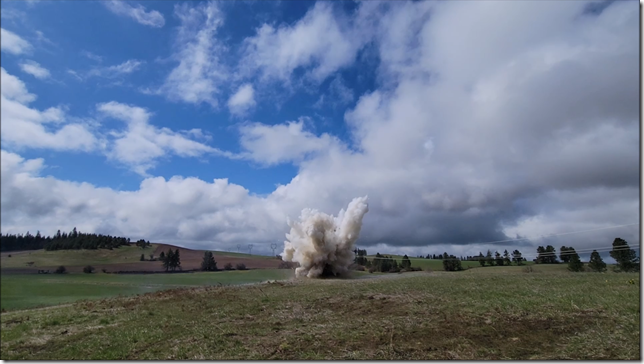 Gasoline is pushed up and the explosive gases are have more horizontal vector. 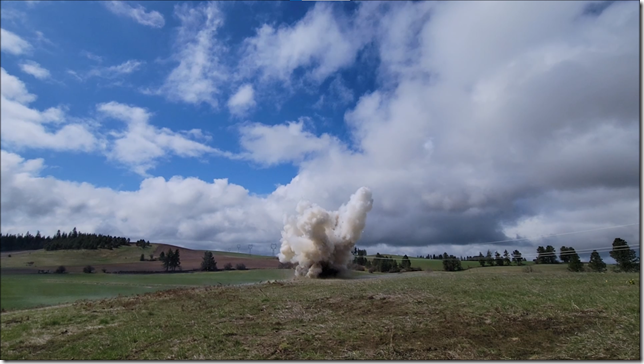 The flares are not in the gasoline cloud and are not showing signs of “life”. 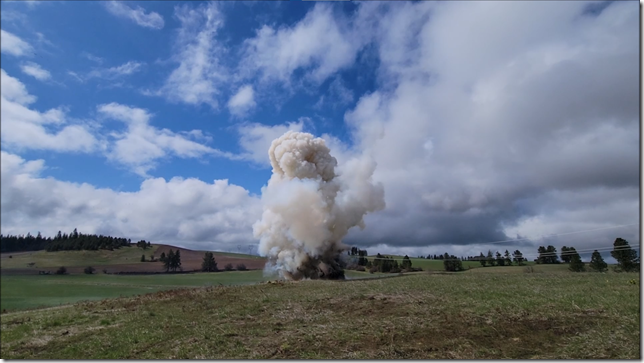 Eric G., first time Boomershooter and long time acquaintance from Microsoft, suggested we use magnesium underwater flares. That sounds like a great idea but I have not been able to find any for sale.

See also Monte’s video and picture of the crater.

These images are of the Grand Finale from the Boomershoot Live webcam: 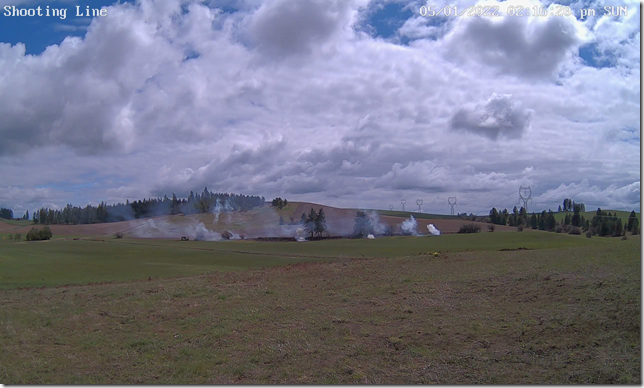 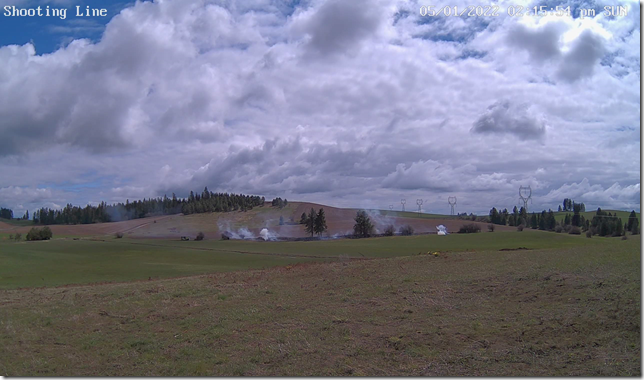 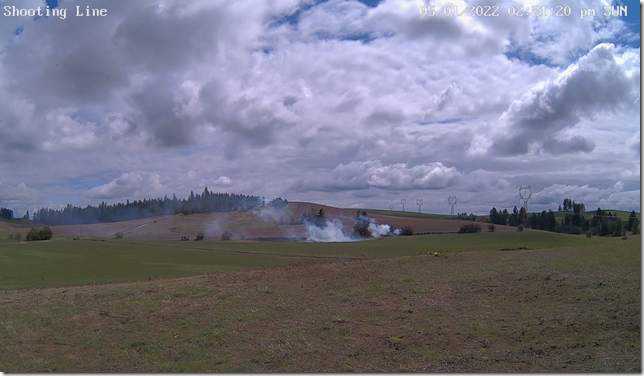 I received the usual numerous thanks for “such an awesome event” and spent considerable time talking with first time participants and how they learned so much and the changes in equipment and preparation they will be making for next year.

Here is part of an email from one of those first time participants (John H. is one of the Precision Rifle Clinic instructors):

That is a first class event you throw, the dinner was really good (and I was impressed with the best western). Don’t worry about the price, everything is going up, just pass the cost down.