Over the 4th of July weekend Barb and I visited Idaho. The plan was to visit Elk Butte Lookout, watch the fireworks show in Orofino, and maybe do some hiking. We drove over on the 3rd, fixed the weather station at Boomershoot shooting line, inspected the top of the shipping container at Boomershoot Mecca, and did a few other odds and ends before checking in at the Konkolville motel in Orofino.

Some of the paint on the top of shipping container is peeling off: 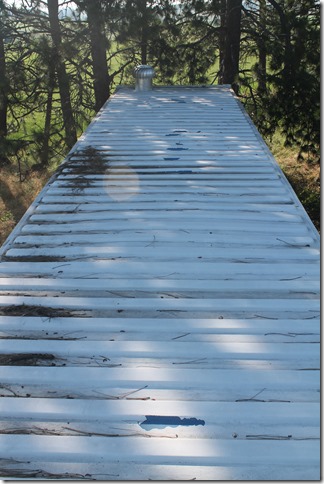 While the areas with the previous leaks don’t appear in immediate danger of leaking again, it’s time to do something about the issue before we do have leaks. I’m probably going to have a roof built over the top of the container.

Barb took notes for me from the picnic table below: 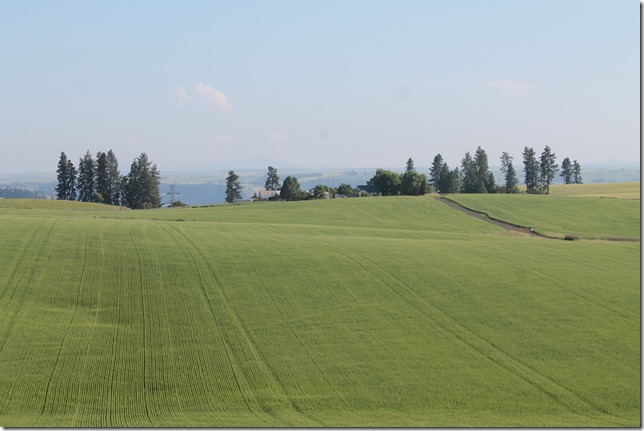 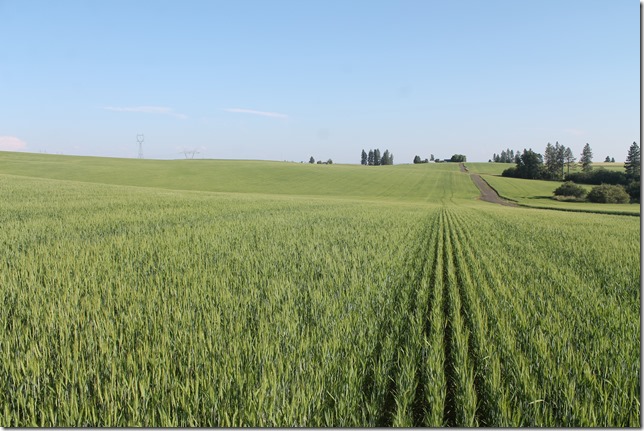 The yellow crop is probably mustard or canola: 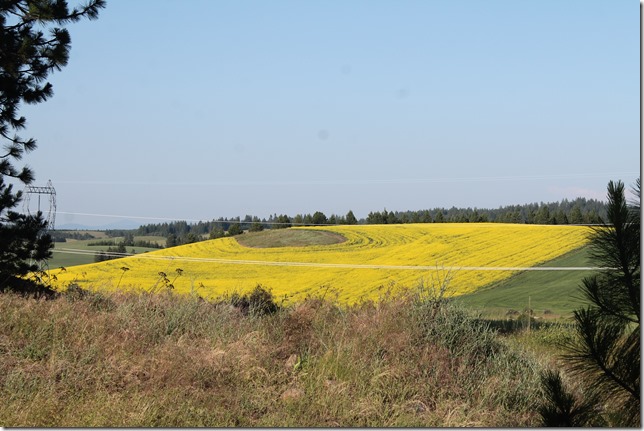 The air was a little bit hazy but we walked out in the wheat field approaching the point of highest elevation on the farm to see the view: 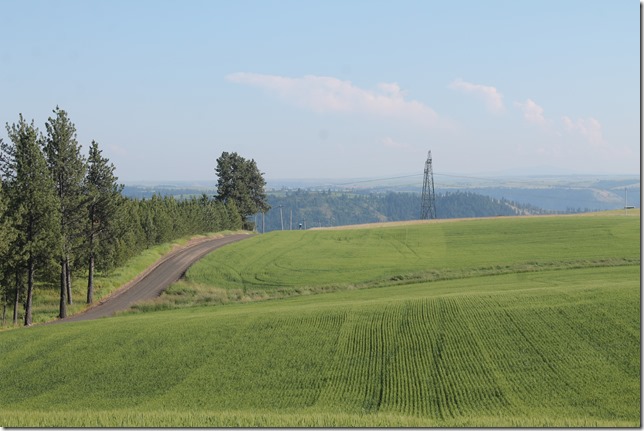 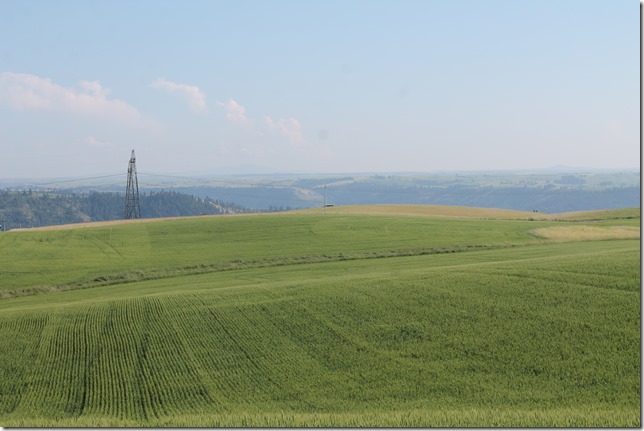 On the way to Orofino we saw a flock of turkeys along the road:

The next day we drove from our motel across the Dent Bridge (see also here) on our way to Elk Butte. The bridge is the second highest bridge in North America.

Soon after crossing the bridge we were on gravel roads. And not long after that Google Maps on my phone started giving us poor directions. We made it to Elk River with only a minor scenic detour.

Ry has told me the maps in the area were wrong and he literally explored a lot of the area and made his own maps. But that was many yeas ago and I figured Google would have gotten things straightened out by now. Here are Google’s directions which we were relying on. I didn’t know it at the time but Bing Maps suggests a different route. The road Google wanted to go on, 3311, does not exist. Or at least it does exist where they say it does. Looking at the downloaded maps on my phone (no cell service in this area) I found an alternate route. We found the road right where it looked like it would be on the downloaded map but the road was closed.

Had I looked at Bing maps before going I would have had a third option to try. From looking at the aerial photograph it looks like this is the route to take.

Heavy sigh. We went into Elk River and bought two huckleberry pies at $30 each. Yeah, that’s really expensive for a pie. But a few years ago we paid $25 for one of these pies and it was totally worth it. It was amazing. This time we were very disappointed. The filling was about half as thick as we remembered it. And the crust was about a half inch thick in places.

We drove back through to brother Doug’s place via  Bovill, Deary, and Kendrick. Google Maps on my phone tried to get us to go through Troy but I knew better than that. In the image below Elk River is on the right edge. Cavendish, near my brother’s place, is at the bottom edge. My phone wanted us to take the loop on far left. 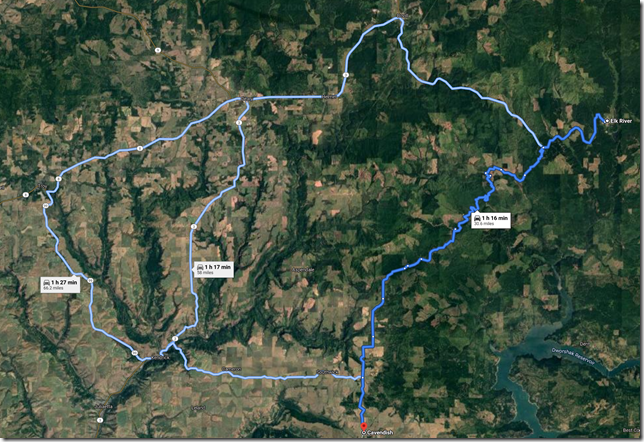 At Doug’s place we hooked onto the trailer and boat and went to Big Eddy to launch the boat onto Dworshak reservoir.

The water was a little rough. Barb wasn’t entirely sure she wanted to go for boat ride anyway and I could tell she wasn’t enjoying it as the tri-hulled boat smashed into waves hard enough that water splashed over the bow and onto the windshield and sometimes onto us. I then put a lot more effort into riding the waves instead of going through them and looking for smoother water to get where I wanted to go. I wanted to show her the Dent Bridge from underneath. But I elected for a long distance view of the bridge and a trip up Elk Creek where the water was calm. 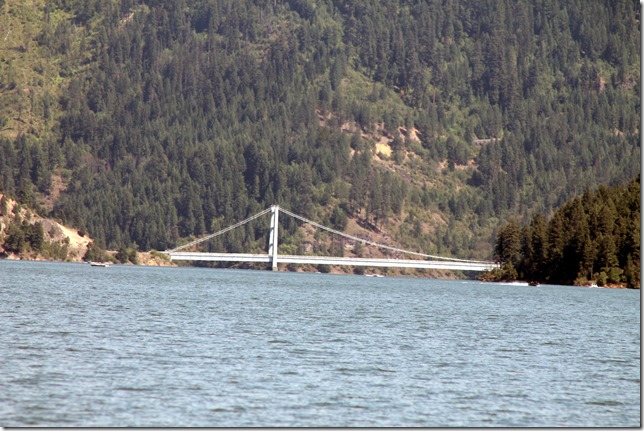 The picture above was taken with a telephoto lens. The bridge is almost 3.7 miles away. The water to the bridge probably would have been fine but if the wind had changed directions it could have gotten rough before we came back.

The Elk Creek portion of the lake is well sheltered from the wind and most of it marked as a “No Wake” zone to protect the shoreline. We made a leisurely trip about 5.5 miles up the creek. This is nearly to the end of the lake in this direction. 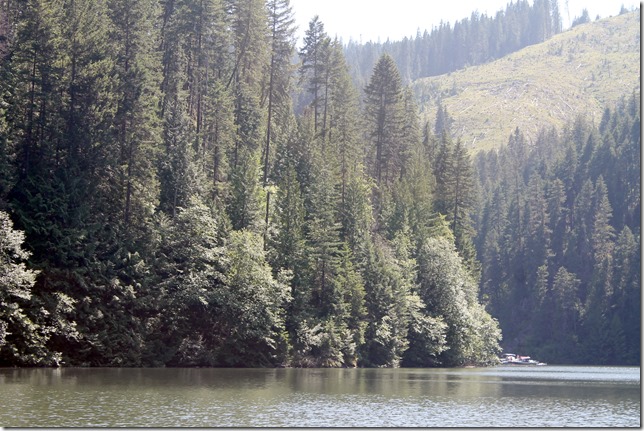 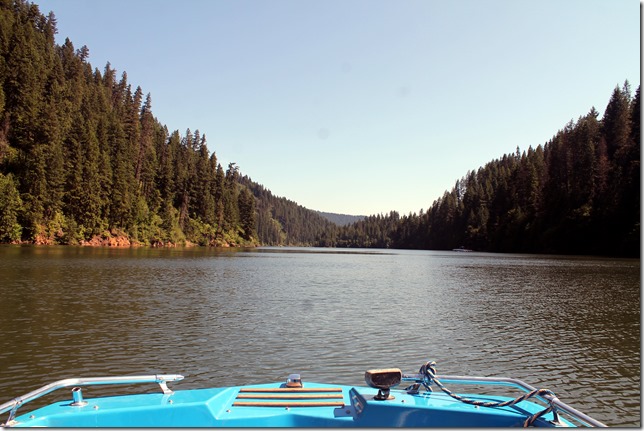 One of the things I really like about this lake are the boat only accessible camp sites. There is a toilet, a table, one or more tent sites, and a firepit at each one. And your nearest neighbor is probably going to be a quarter mile or more away. Here is one of them: 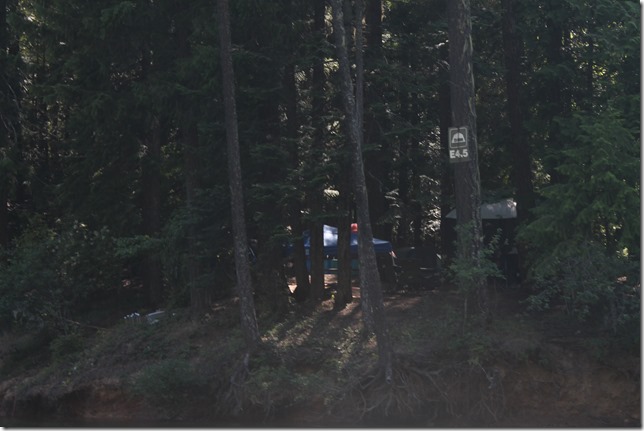 Here is a better picture of the boat:

It’s a 16.5 foot long, 1973 Silverline Tri-Hull with a 140 HP Mercruiser inboard/outboard engine. My parents bought it new and kept really good care of it. Doug recently did some work on it and it could still use a couple of minor repairs but it is in great shape considering it’s age.

After taking the boat back to the farm we picked up two hundred pounds of lentils and went back to our motel room. We ate dinner in our room and rested before going to the park for the fireworks show. Before the show they announced the people who put on the show, one of which was a high school classmate of mine, were retiring and they were looking for someone new to put on the show next year. With such a small town it may not be easy to find someone to put on a show when there are bigger venues nearby. It’s possible Barb and I saw the last professional fireworks show in Orofino.

The next day, Sunday, we drove back home to Bellevue. As expected for a long weekend, the traffic over Snoqualmie Pass was heavy and we encountered stop and go conditions for a while.

Overall, it was a nice weekend. And Barb now feels a lot better about riding in a small boat. This was sort of a testing ground for going on a boat ride with some friends near Point Roberts. They had invited us to go with them but Barb wasn’t entirely sure about it. After our trip on Dworshak she sent them a message saying, in essence, “Let’s go!”

So, even if we didn’t make it to Elk Butte Lookout the trip turned out well.

2 thoughts on “4th of July visit to Idaho”