On August 2nd Ry brought Henry, his nephew from Illinois, to the range. Henry had shot a fair amount with Airsoft guns but never a real gun. As usual, I started him out with safety rules, grip, stance, and sight alignment on a suppressed .22 from about 10 feet away. This was his first shot (from a video by Ry): 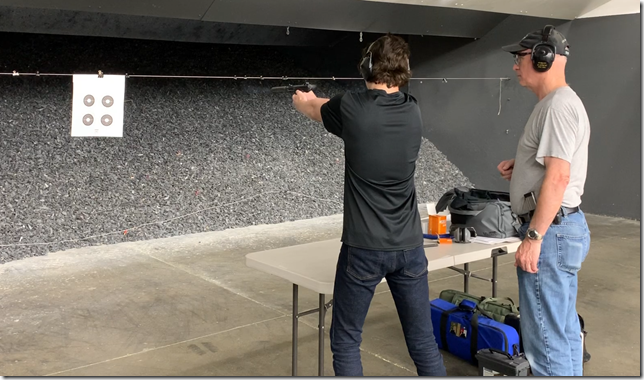 Most of the time he was able to keep them on the target. He tended to have a bimodal distribution of his shots. They were either good or way off. I gave him the gun with an empty chamber when he expected the gun to be loaded. The bobble of the gun showed both of us he was not holding the gun steady as he squeezed the trigger. More dry fire helped.

I moved him on to shooting multiple targets. One shot per target. After he seemed have that down fairly well I removed the suppressor and brought out the timer. The pressure of the timer showed and on nearly every run of five shots he would miss one of the targets.

I told him each miss was a three second penalty, as it is in Steel Challenge matches and told him to remember the mantra, “Trigger prep, sight alignment, squeeze, follow-through”. The hits got better and then his times improved with some strings being in the mid fours.

I moved him on to low powered .40 S&W loads. At first he did almost as well as with the .22. Then there were more and more wild shots. More dry fire was required. After he seemed back in control I turned him over to Ry as I prepared to leave (Barb and I were headed to Mount Rainier that evening). Ry had his own set of toys and Henry started out with a fully equipped 9mm:

I picked up my brass and gear and left while Ry and Henry finished out the last 20 minutes or so we had the bay reserved. Ry later send me video and a picture he had taken of Henry with an AR:

The next day, while Barb and I were hiking nearly over 6500 feet above sea level on Mount Rainier, I got a message from Ry, “Thank you for yesterday. Henry can’t stop talking about it.”

Another shooter has joined the community.