Today I shot in an USPSA match at the Paul Bunyan Rifle and Sportsman’s Club (results are here). I’ve been shooting USPSA matches for over 20 years so one might expect there are very few, if any, things I have not seen and/or done or at least heard of in regards to stage designs. I certainly thought that before today. Sure, at the big matches they have fancy props and they do interesting things with platforms, carrying odd objects (I seem to remember a squirrel statue from many years back), and even a mining cart. But have you ever seen a stage which one only required one shot? A state which required a reload between each shot? Or a fixed time stage with no timer? Well, today I shot all of those oddities.

The stage called Quick or Slow was a single USPSA Popper at 35 yards. You started standing in a box with the gun loaded. Upon the signal you were to draw and knock down the Popper. If you missed you were required to reload between each shot until you knocked it down. I was the first shooter in our squad and I felt pretty good about dropping it on my first shot with a time of 2.21 seconds. Others did quite a bit better. The overall winning with a pistol caliber carbine dropped it in 1.17 seconds. The best pistol shooter (with an optic sight) dropped it in 1.38 seconds. I came in at 13th place in Limited class out of 26 shooters, 38th out of 97 overall, and got a whopping 2.647 points (in overall ranking) on that stage. One poor person took over 37 seconds to get 0.158 points (in overall ranking).

The stage called Murmaider had four disappearing targets which the shooter activated by stepping on a slightly raised platform. It was Virginia Count scoring so you had a maximum of eight shots. Your gun was loaded on a table directly downrange of the activator. Two targets were drop turners which presented themselves three times. The presentation time couldn’t have been more than a half second for each turn. There were two swinging targets that were pretty fast acting too. The “fixed” time was the total time the targets were visible. It was self actuated so there was no buzzer required. Hence, no timer. Here is how one shooter handled the problem:

Out of 40 points possible the overall winner got 31 (Limited class winner got 29). I got 22 points even after reflexively shooting at one of the drop turners three times when I realized I had a miss as I fired the shot. I knew I made an error and didn’t take one of the two shots I should have taken at one of the swinging targets which were much easier shots. This avoided the extra shot penalty but cost me the opportunity of another five points. The 22 points gave me a tie for 4th and 5th out of 28 shooters in Limited.

There was one other first for me today. I shot a Popper, got a clang from a hit, assumed it went down and continued with the rest of the stage without confirming that it went down. I didn’t realize it didn’t fall. I was totally surprised when the range officer asked me if I knew that I left it standing. We went over to look: 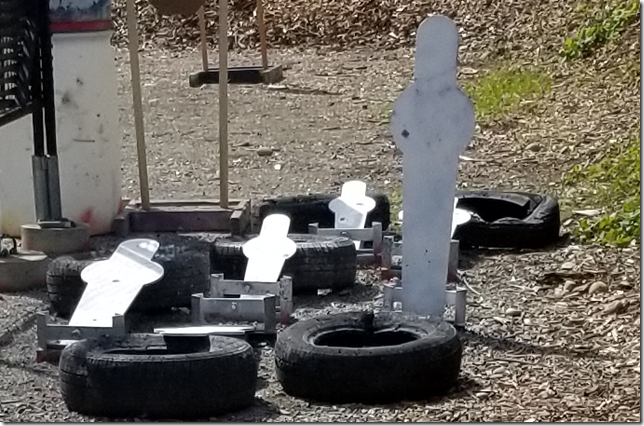 There was nothing wrong with my shot. I was shooting 40 S&W with a Power Factor of 170 or greater so I asked for a calibration test. I’ve never done that before. I’ve shoot low plenty of times and figured it just wasn’t worth the effort to get a calibration test and took another shot (or two) to get it to fall.

This time the range master came over, shot it with the 9mm calibration ammo almost exactly dead center in the circle portion of the target, and it slowly fell forward as it was supposed to. I got a miss. Oh well, it was a bit of bad luck.

4 thoughts on “USPSA firsts for me”