Sheryl isn’t a first time shooter. But she didn’t have much experience. She recently moved here from the Philippines and Calvin, her former Marine husband, did teach her to shoot. Calvin likes to drive up in the mountains on Forest Service and even unmarked dirt roads and yesterday they showed Barb and I a wonderful viewpoint east of Snoqualmie Pass:

After getting off the mountain we went to the range where both of them shot a .22 with a suppressor. I gave Calvin a couple of suggestions and let him shoot by himself. I spent a lot more time with Sheryl and here is the result of her first target from about 10 feet away with 10 shots per bullseye:

I then had them shooting five shots with the requirement that each shot be on a different bullseye from the previous to simulate a Steel Challenge type stage. Then I put them on the shot timer. I told Sheryl that I thought with a little practice she could do it in about five seconds—one second per shot. “No way!”, she said. I told her at first I expected something on the order of seven or eight seconds but we could get her somewhere in the range of five today.

It took a little bit for them to settle down and not get misses but when we were done Sheryl did better than Calvin with one string at 4.44 (IIRC). Calvin’s best was 5.15 (IIRC).

I moved them back to about 20 feet and Calvin did better. Sheryl kept trying to shoot the same speed as at the shorter range and had misses. A another trip or two to the range is going to be required before I take them to a match.

I then put them on my STI Eagle chambered in .40 S&W with low recoil loads: 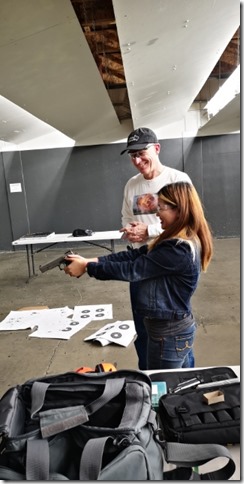 They both did well but Sheryl, in particular, had problems with the gun not fully cycling. I gave her a few major power factor loads. She did just fine with them but with the heavier gun, large grip, and her small hands I could tell she was getting tired. It was time to clean up and called it quits for the day anyway so that’s what we did.