Paul and Louise visited us from Canada this weekend. Paul was in the U.K. military and had a fair amount of experience with rifles but very little experience with handguns. Recently they purchased handguns and took some classes. Then Paul decided he would like to get into reloading. I showed them my reloading set up and talked quite a bit about it with them. Why I reload, some tips on reloading he probably won’t find in the YouTube videos, and why I have some of the equipment.

Barb and I took them to the range and Paul had his first experience shooting an AR and Louise shot a rifle for the first time. Among other firsts were shooting a gun with a suppressor. 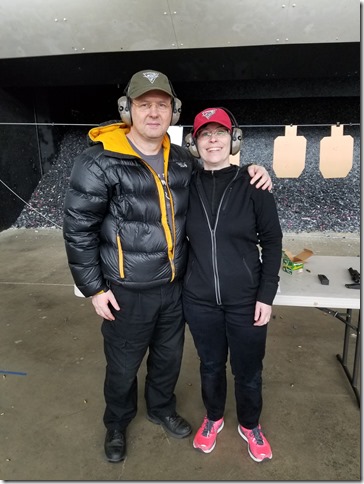 I did a little coaching with Louise but Paul was doing very well without much input from me. We probably went through about 400 rounds total of .22LR and .40 S&W. It was a good day and you can see the indicator of that with the new shooter smile on Louise’s face.