Barb and I were on a cruise the last few weeks (Los Angles to New Orleans through the Panama Canal). I checked the web site (Norwegian Cruise Lines) before we left and, no surprise, guns were not allowed but knives with blades less than four inches long were acceptable (curiously, laser pointers are not allowed either). Never mind that steak knives on the ship were probably going to be longer than four inches, but whatever. I brought along the two Spyderco Delicas I carry in my pockets whenever it is legal to do so. I got them on the ship just fine. I got off the ship at our first stop then got back on just fine. Security even examined them and measured the blade length. At the second stop shore security took them from me when we tried to get back on the ship. I got a receipt and they told me to talk to ship security. I talked to guest services about the knives and they promised to contact security for me and they would get back to me. After about a day and a half I talked to guest services again. They said security would come out to talk to me about the knives. After about 20 minutes two security people showed up. I greeted them warming and introduced myself and shook their hands. Security Officer Judd Hinchliffe was the one that did all the talking: 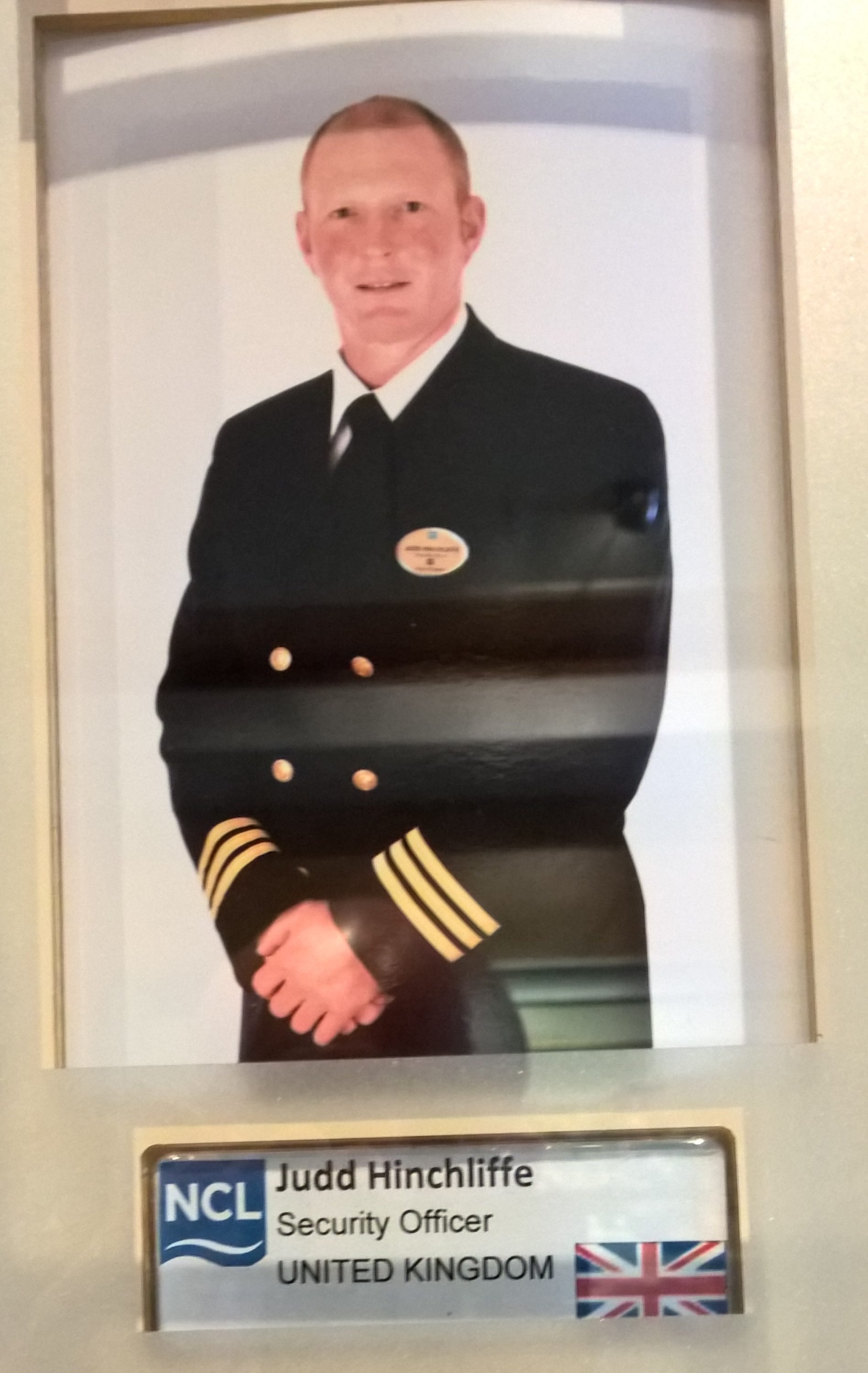 The following is a close approximation of the conversation. My thoughts which I dared not express are in [brackets].

Hinchliffe: I have your knives but these are not allowed on the ship.

Joe: I checked the website before we got on the ship and it says knives with blades less than four inches are acceptable.

Hinchliffe: Yes. But these knives are what we call lock blade knives.

Joe: I didn’t see anything on the website about lock blade knives.

Hinchliffe: It doesn’t but in the U.K., where I’m from, these are banned. We not in the U.K. but these are banned for a reason. With a normal knife if you try to stab someone with them the blade may fold on your hand. A locking blade knife is much more dangerous. These are what we call lock blade knives.

Joe: [Are you saying that U.K. law is incorporated into Norwegian Cruise rules while we are sailing in international waters off the west coasts of the United States and Mexico? Why not incorporate U.S. law which says you are infringing upon my right to keep and bear arms? That’s a felony by the way.
That’s the second time you told me they were lock blade knives. I knew that before you ever said so about these knives and I heard you the first time. In my defensive knife classes they taught us to use slicing motions, so the locking feature isn’t really going to make a difference if I need to use the knife on someone.]  If I were ever to go to the U.K. [not bloody likely until you fix your idiotic anti-self defense laws] I wouldn’t bring my knives.

Hinchliffe: I know this isn’t the U.K. but I’m in charge of security and I need to make sure everyone is safe. Why do you carry knives?

Joe: I grew up on a farm. When I was in the first grade the teacher gave all the boys in the class a knife for Christmas. I have carried a knife ever since then. [So… if someone attacks Barb or I and we are unable to defend ourselves because you took away our knifes you would be held responsible for the attack?]

Hinchliffe: Look around us. Does this look like a farm?
Joe: No. [It doesn’t look like the U.K. either. What does it matter?] Of course not.

Hinchliffe: In the U.K. we have a knife culture since we don’t have gun culture like in the U.S.

Joe: [You say “gun culture” like it’s a bad thing. If you would have let me bring my guns on board I would have been happy enough to leave my knives at home so you could indulged your prejudice against knife ownership without causing me any grief. As it is I’m probably going to lose the callouses on my hands from shooting 500 to 1000 rounds a week in practice. I’m then going to have to start practicing at drastically reduced levels to avoid blisters.] Yes, I know. I read about it sometimes.

Hinchliffe: What do you use a knife for?

Joe: I use them for all kinds of things. Cutting apples, opening boxes, most recently on this cruise I cut the labels off of some new clothes for my wife.

Hinchliffe: How are you getting along with your wife?

Joe: We get along great! In fact while we were waiting in line over there someone asked us if we were newlyweds. [Seriously?!! You want to get into couples counseling? If I were inclined to hurt her there are many options other than one of these knives. Let me see, I haven’t thought about this before. What would be my options? Push her overboard, push her down the stairs, hands, fists, feet, elbows, knees, a metal water bottle, a pillow while she sleeps, the metal chairs on our balcony, I could burn her with the hot hair dryer in our cabin, hmm… I could go on for quite some time like this…]

Hinchliffe: Why do you carry two knives?

Joe: [What difference does that make? Norwegian Cruise rules don’t put a limit on the number of knives only on the length of the blade. According to the rules I can have 10, 100, or 1000 knives. But you don’t care about the written rules, do you?

Do you think I’m twice as dangerous with two knives? How about if I had ten knives? Do you think I want to sell them to other passengers?] I have one in each pocket so I can easily reach one or the other if one hand is holding something.

Hinchliffe: I can’t let you have these knives in public. If someone saw you with them it would frighten them.

Joe: [Really? Even though the rules don’t prohibit it? Oh, yes, the rules don’t matter to you. What matters to you is that you get to exercise your prejudice against people who carry knives.

Perhaps the ship has a mental health professional on board who could help people with irrational fear of knives. Have you considered seeking some help yourself?] Well, I don’t need to have them in public.

Hinchliffe: You seem like a reasonable fellow so I’m inclined to let you have the knives back. But you will have to put them in your luggage so they can’t be seen by your steward when they are cleaning your room.

Joe: That sounds fair enough to me. I’m very much a rule following person. If I had known locking knives were a problem I would have left them at home but the website didn’t say anything about them. [So small pocket knives, which meet the your website criteria, sitting on a shelf in our cabin are going to frighten your crew? If this is really true it sounds to me like you need have higher standards for crew selection. I know! If they fire you and raise the standards for your position the problem will be solved for everyone!]

Hinchliffe: I’m going to escort you back to your cabin and you can put them away while I watch.

Joe: Okay. That works for me. [How does this help? If I wasn’t going to do that if you gave me the knives now, what makes you think I will leave them hidden away the minute after you leave the cabin?*]

Hinchliffe: [As we walk to my cabin.] I still don’t understand why you have two knives.

Joe: [That’s not a question so I don’t have to say anything now. I’m just going to walk back to the cabin, get my knives, thank him, and enjoy the rest of the cruise. I’m sure there are lot of things this guy doesn’t understand in his life and I don’t think there is anything anyone can do to help him with that.]

* It’s possible he visited our cabin once or more times when we were on shore or at a meal and checked to make sure the knives remained where he saw me stash them. I was tempted to put them in the safe or hide them at the bottom of my dirty laundry bag just to mess with him, but decided I had better things to do on the cruise than play mind games with the head security officer.

40 thoughts on “Overheard on the cruise”