I do a lot of indoor shooting and the possibility of lead poisoning is something that concerns me. I get a blood test for lead every year and it stays within the “normal” range but when I wasn’t doing much shooting for a couple years it went to almost undetectable levels. Hence, I know I have a lead source in my environment and it’s probably either the indoor range and/or the reloading.

When I saw Powder Valley had no lead, small pistol, primers available I ordered some to test. I didn’t know they were even available to the reloading community. These primers would probably reduce the lead exposure at both the range and when handling the reused brass during reloading.

Due to a mixup by Powder Valley I ended up (after a couple of weeks) getting 1500 Fiocchi standard primers as well as 1500 of the no lead primers. They came in a brick of 10 trays of 150 primers per tray: 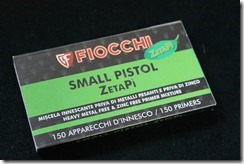 They are, ironically, a lead grey color: 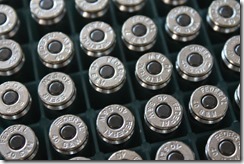 I made up my indoor loads and ran them over my chronograph:

With the polymer coated bullets I use outdoors and CFE Pistol powder the results were even worse. The standard deviation went from about 10 fps with WSP to about 18 fps with the Fiocchi no lead primers (I haven’t tested the Fiocchi standard primers with these bullets).

I really don’t want to keep two types of primers around. I want to minimize the number of components types rather than expand them. And if I increase the standard deviation on the match ammo I would need to increase the mean velocity to insure I continue reliably making major PF. Increasing the velocity also means increasing the reloading cost above that of the increased primer cost, and increasing the recoil to solve a “problem” I don’t really have.

I think I’m going to continue using the WSP primers.

** Yes, I know these aren’t reliably making Major Power Factor, I’m increasing the powder charge some based upon this data. This load is just for practice anyway. I have never used them at a match. For USPSA matches I have been using Black Bullets, WSP primers, and ETR7 which has been repeatedly tested to give me a PF of a little over 170 with a SDev of about 9 fps.