I was doing some reorganizing and throwing away of old things on my library shelves and ran across a “men’s magazine”, Cheri (caution explicit photos), from October 1983. I don’t know why I still had it. I never subscribed to it. It was a favorite of a friend of my ex-wife and I. But we lost contact with him in about 1979 or 1980.

I was about to toss it in the recycling when I noticed something on the cover: 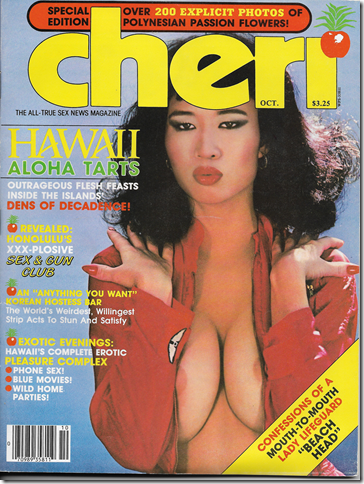 A sex and gun club in Hawaii? That’s odd. For one, I wasn’t into guns then. And two, were guns that less frowned upon that a magazine of that genre would, let along a club, risk combining the two subjects? And three, I never could, and still don’t, see a connection between sex and guns. They just don’t mix for me.

I scanned in the first two pages of the article (probably NSFW) and put them here and here.

In the second page of the article you will find they say that all calibers greater than .22 LR are banned in the state. Even though they still suffer under extremely repressive gun laws it seems as if Hawaii’s gun owners made progress in some areas over the last 33+ years.

I wondered if the magazine was still in existence and found the link to their website. I discovered their current content is all hard core. I remember our friend saying he liked the magazine because it was not as explicit as many other magazines and it featured women who looked more real than those in the better known magazines. Looking at my sample it appears to be a notch less explicit than Playboy magazine was at the time.

Times change in many ways.

4 thoughts on “How times change”