The ferry ride was a little unusual, in that I don’t think I have ever been on a ferry when it was snowing: 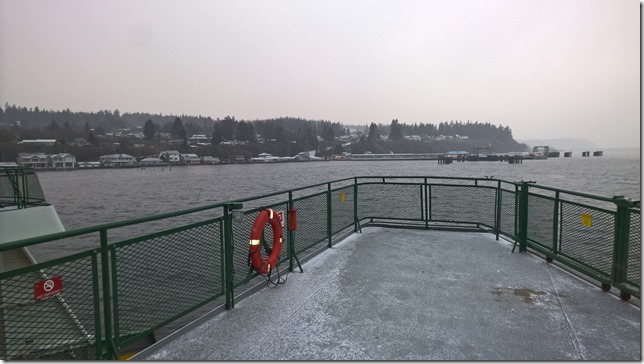 The roads on the Island became quite slick even though I had AWD and good all-season tires:

And, of course, this means we had snow at the match: 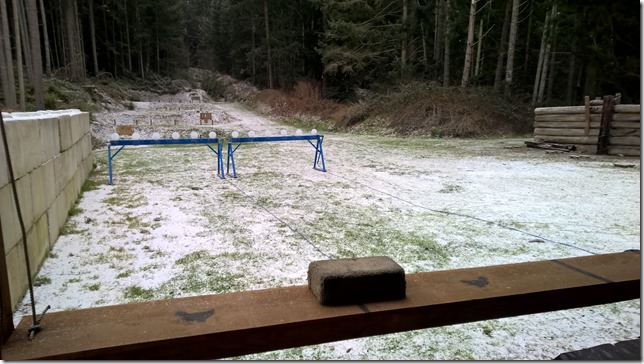 In the video below I first have a video of Thomas shooting (I forget who he was shooting against). With his open class gun and shooting ability he is very difficult to overcome. You can see further evidence of this in the second match of the video. Thomas is on the left and I’m on the right. He has completed his plates when I have my first miss on the next to the last plate. I think I caught sight of his near completion and tried to hurry. Don’t ever hurry in competition. You can’t miss fast enough to win.

Last time, overall, I was beat by Thomas, Steve, and Jeff. I had split the two match ups with Steve, won twice against Jeff, and lost a few others. Jeff did well against pretty much everyone else except Thomas and Steve. Hence I came in fourth. I didn’t’ feel too bad about it as everyone above me was shooting open class guns while I was shooting with iron sights.

This time we were split into two randomly selected groups instead of everyone shooting against everyone else. Jeff, Steve, and I were the best shooters in our group and Thomas was the best in his group (and overall, it’s quite obvious when you see him shoot). So, in my mind, it was all about beating Steve and Jeff for a chance to get into the shoot off between groups against Thomas. And with their open class guns against my iron sighted gun I knew it was going to be tough.

I again split with Steve but this time won all my other match ups in my group. Steve lost the one against me and had one win and one tie with Jeff. This gave me a half point lead over Steve and wining in my group. In the shoot off against Thomas I lost both, badly, but I still was awarded the second place finish.

For second place I received $13. I think this is the first time I have ever received money in a shooting competition. As the entry fee was $10, the ammo was probably $20, not to mention gas and the two ferry rides, I didn’t make any money on the event. I won’t be I going professional anytime soon.