Both Barb and I like the color blue. But that isn’t the reason I bought a bunch of The Blue Bullets: 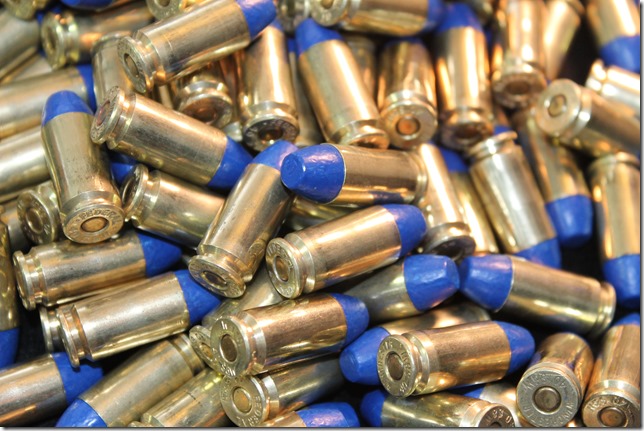 I originally bought 250 of them last August because I saw someone else shooting them at a match and I checked out the price and found them to be a good value. I reloaded some and found they were essentially identical in terms of velocity for a given powder charge as other polymer bullets I have been using.

I have reloaded and shot thousands of polymer coated lead bullets. They were always accurate and probably most importantly, with no copper jacket, there is almost nothing coming back at the shooter, range officers, and spectators when shooting them at steel targets in good repair.

Previous to the Blue Bullets my most recent purchase of polymer coated bullets were about 10000 “Master Blaster” bullets I purchased in 2006 or 2007 just as they were going out of business. I have been shooting those in outdoor matches (the indoor ranges won’t let me shoot them) since then. I loaded up the last of those recently and was going to use The Blue Bullets to replace them.

So what about The Blue Bullets?

I shoot a lot of steel matches. For Steel Challenge matches they don’t specific a minimum power factor (I thought it was 125, but I couldn’t find it online in their rules) for centerfire pistols. For The International Steel Association the rules say a minimum power factor of 120 is required. When I’m shooting USPSA matches I’m shooting ammo with a PF of 175 or more. I could switch to 9mm for steel matches as a lot of other people have done, but I decided to keep using .40 S&W and just make lighter loads. Remember the low recoil loads I was making for new shooters? I’m going to use those research results to give me a low recoil load for shooting steel. And to make it easy to identify which ammo I have in the magazines and ammo boxes I’m going to use The Blue Bullets exclusively for the low recoil loads.

6 thoughts on “Blue is my favorite color”